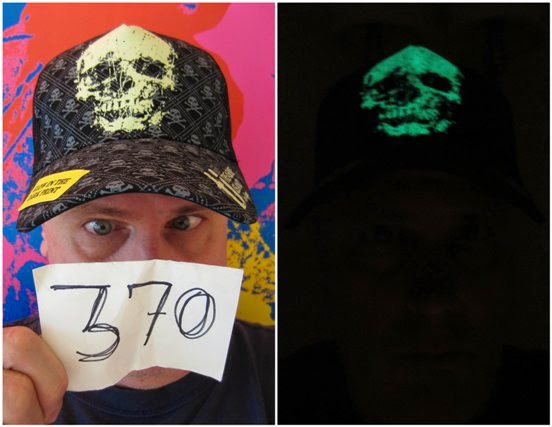 Purchased for the Project by the Bride at the Sirens Cove Shoppe at TI a few minutes before midnight this morning. I tried to capture the glow-in-the-darkness in the photo at right.

The Siren Bride gets the hat-tip, the TI merchandise mix the assist. This is one thing that won't be staying in Vegas.

Q: OK, nice hat -- but what exactly is Project Cubbins, anyway?A: One man's homage to Dr. Seuss and his second book, "The 500 Hats of Bartholemew Cubbins," which celebrated the 75th anniversary of its publication in 2013, Project Cubbins is an attempt to document the wearing of a different hat or piece of headgear every day for 500 consecutive days. No do-aheads, no banking of hats, no retroactive entries. PC started on May 27, 2013 with Hat 1.