Project Cubbins: Hat 365 - A Year of Hats in a Flash Edition 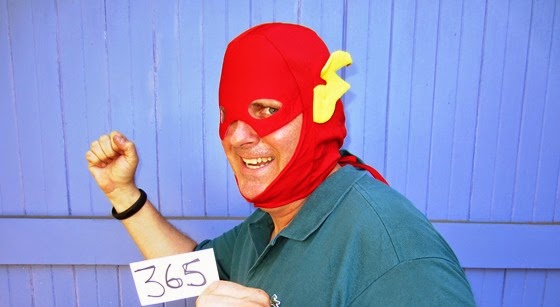 Day 365 / Hat 365: Red polyester Flash cowl with yellow lightning bolt earpiece detail and red string that ties in the back. Graciously loaned to the Project by Brian Razzano.

Brian passed off the cowl yesterday at a barbecue in Sherman Oaks. When he did so he asked: "Does a cowl count?" In my world a cowl most certainly does count (hats and headgear folks!) and I couldn't think of a better piece with which to mark  full year of millinery madness. Yes, that's right, it's been a full cycle around the sun since I embarked on my frivolous pursuit of sporting a different lid every day for 500 days.

While it seemed like a daunting challenge when I stood in our kitchen last Memorial Day to snap the first hat in the series, it has kind of gone by in a flash -- thanks to all the generous contributions of family and friends. With any luck, we'll make it all the way to 500.

But back to the Flash for a minute. Brian, who says he had the hat because he was thinking about making a short film about a guy who finds Flash's ring (that's where the DC superhero keeps his costume),. He probably didn't realize that Barry Allen and his Scarlet Speedster alter-ego was actually my favorite character growing up (I was a huge comic book geek).

Of course Barry Allen wasn't the only (or even the first) incarnation of the Crimson Comet, a DC Comics universe character that was created by writer Gardner Fox and artist Harry Lampert and first appeared in Flash Comics #1 in January 1940 (the Jay Garrick version, easily recognized by his much different uniform that actually includes a winged helmet a la the Greek god Hermes. I didn't realize (until I got Googlin' today) that the Barry Allen version is is "generally considered the first hero of the Silver Age of comic book," (so sayeth Wikipedia, anyway).

The hat-tip to Brian Razzano, and a sincere thanks to all those whose loaned lids got me a spin through the calendar year. Now it's time to tiue my running shoes on real tight and sprint to the end.

Related:
PC 364: Lalaloopsy
PC 363: Adventure Time!PC 362: P BrainQ: OK, nice hat -- but what exactly is Project Cubbins, anyway?A: One man's homage to Dr. Seuss and his second book, "The 500 Hats of Bartholemew Cubbins," which celebrated the 75th anniversary of its publication in 2013, Project Cubbins is an attempt to document the wearing of a different hat or piece of headgear every day for 500 consecutive days. No do-aheads, no banking of hats, no retroactive entries. PC started on May 27, 2013 with Hat 1.
Posted by Adam Tschorn at 4:03 PM