I ran across this hat in the eight-year-cleaning cycle currently underway in the Garlodge and couldn't believe that I hadn't yet included it in the Project but I looked high and low and it doesn't appear I have. If it looks familiar it's because one of my Facebook profile pictures includes the hat - and it's always generted lot sof comments every time I cycle it through. 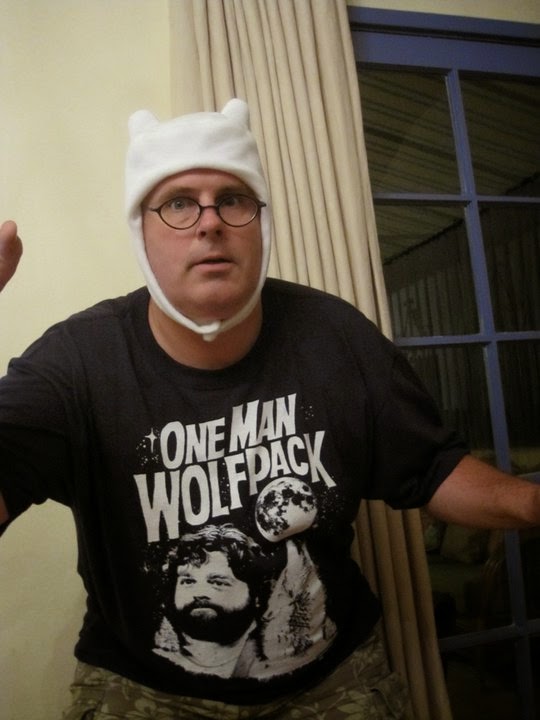 It originally ended up in my personal BOH by way of the office where it was sent to promote the Cartoon
Network series "Adventure Time" created by Pendleton Ward, which aired its first episode on April 5, 2010, (so sayeth Wikipedia, at any rate).

The character that wears this distinctive headgear is a chap named Finn. The show's website says this about him: "Finn is a silly kid who wants to become a great hero one day. He might not look too tough, but if there's evil around, he'll slay it. That's his deal."

Oh, and the Facebook profile photo of me wearing the hat at some undetermined point in the past is included above. I think it captures the spirit of "Adventure Time" though I had no idea at the time.

A: One man's homage to Dr. Seuss and his second book, "The 500 Hats of Bartholemew Cubbins," which celebrated the 75th anniversary of its publication in 2013, Project Cubbins is an attempt to document the wearing of a different hat or piece of headgear every day for 500 consecutive days. No do-aheads, no banking of hats, no retroactive entries. PC started on May 27, 2013 with Hat 1.
Posted by Adam Tschorn at 6:16 PM