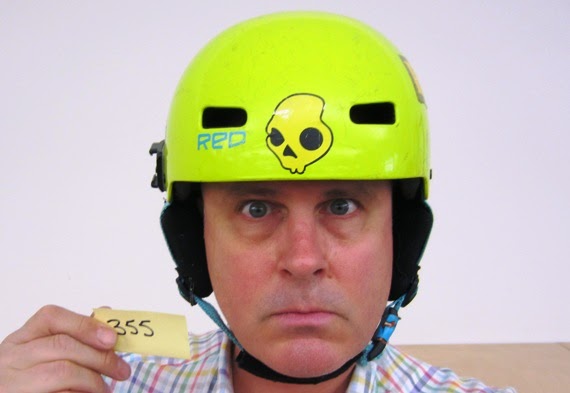 Day 355 / Hat 355: Lime green hard plastic, sticker-covered snowboarding helmet with interior hard foam liner, turquoise-colored chinstrap and and attached zippy pocket earflaps that allow the wearer to crank serious boardin' tunes all the way down the hill. (Where was this stuff when I was hittin' the slopes?).

Composition tag reads polyurethane (though I can't honestly determine if that refers to the lining or the shell). Additional interior tag indicates the helmet was manufactured n China in April 2010.

Plucked from the MRBOH, this Trace II Audio Snowboard Helmet is by a brand called R.E.D. (you can see the logo on the front of the helmet next to the skull) and since I noticed a Burlington, Vermont, mailing address on one of the interior labels I started sleuthing. If my intel is correct*, it's a Burton-owned brand -- or at least the two brands share the same address (80 Industrial Parkway).

A funky Friday wired-for-sound helmet? Awesome. An unwitting connection to the 802?  That's music to my ears.

[*Updated 5/16/2014 10:06 a.m.: My intel was kind of correct. My Burton-involved cousin Bryan passed along the following: "It was a Burton sub-brand/company. R.E.D. stood for Rider Enhancement Devices. The company was put to bed at the end of last season [and] ANON Optical now makes/holds the branding for Burton's helmet line." So an assist to Cuz Bee for the clarification.]

A: One man's homage to Dr. Seuss and his second book, "The 500 Hats of Bartholemew Cubbins," which celebrated the 75th anniversary of its publication in 2013, Project Cubbins is an attempt to document the wearing of a different hat or piece of headgear every day for 500 consecutive days. No do-aheads, no banking of hats, no retroactive entries. PC started on May 27, 2013 with Hat 1.
Posted by Adam Tschorn at 9:43 AM