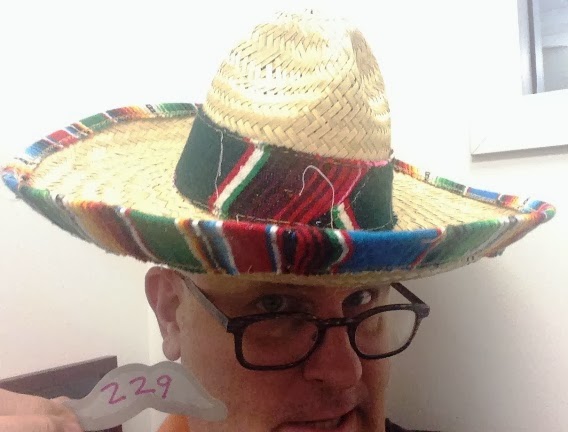 This was a random drive-by borrowing for the Project from Hero Complex editor Gina McIntyre's office and she kindly indulged me as I sat there and took my own picture -- as I held up a mustache-shaped Post-It Note with the number 229 on it. (And what was your work day like?)

Of it's provenance, McIntyre says: "I think that was something that was sent [as a promotion] for the last 'Hangover' movie. We joke around here that it's the deadline sombrero." As a guy who used to wear various pieces of "not-now-I'm-in-the-barrel" headgear in the cube farms of old, I appreciate the idea of a deadline sombrero very, very much.

So today's tip o' the hat goes to Gina -- and all those here and elsewhere who, from time to time, find themselves donning the deadline sombrero!

Q: OK, nice hat -- but what exactly is Project Cubbins, anyway?
A: One man's homage to Dr. Seuss and his second book, "The 500 Hats of Bartholemew Cubbins," which is celebrating the 75th anniversary of its publication in 2013, Project Cubbins is an attempt to document the wearing of a different hat or piece of headgear every day for 500 consecutive days. No do-aheads, no banking of hats, no retroactive entries. PC started on May 27, 2013 with Hat 1. Got hats? If you loan 'em, you'll get e'm back safe and sound!
Posted by Adam Tschorn at 2:18 PM