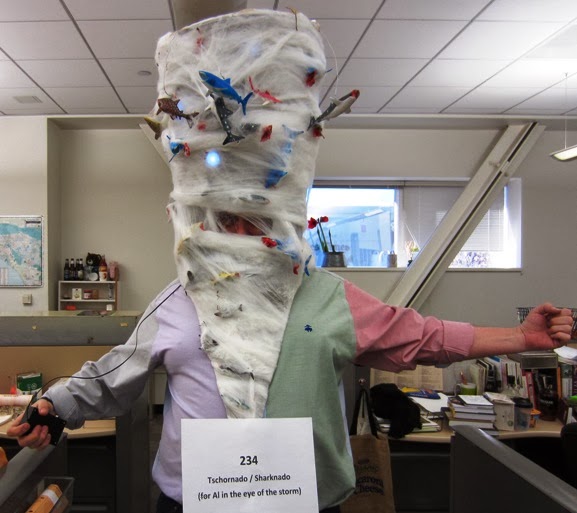 Day 234 / Hat 234: Wire, fabric and plastic homemade "Sharknado" costume graciously loaned to the Project by the talented Noelle Carter who crafted this herself as a Halloween costume for her partner Val.

For anyone who missed it, "Sharknado" was the so-bad-it's-hilarious TV movie that aired on the Syfy channel back in July 2013 and starred Ian Ziering as a guy named Fin (get it?), Tara Reid and John Heard.

The camptastic plot line involved a waterspout that somehow sucked up all manner of killer sharks from the Pacific Ocean and proceeded to drop them all over the greater Los Angeles area.

This costume might have actually had a higher production value than the guilt viewing pleasure that inspired it. Built around a wire frame (fashioned out of a a tomato cage), it  is not only festooned with all manner of plastic shark (some with creative chunks of faux carnage in their mouths) but it also has a string of blinking lights and a thunderous stormy soundtrack (controlled by the black box gizmo I'm holding in my left hand in the above photo).

The "Tschornado" reference comes from a former law school roommate who once observed that whenever there was work to do (a test, project or paper or the like) I'd whirl and spin through the house puttering and tidying and doing everything (except my work) at a high rate of speed. When I was in that mode he'd refer to me as the "Tschornado."

Although Noelle certainly gets a hat-tip for her considerable skill -- not to mention the loan of the cone -- this installment of the Project is dedicated to my big brother Al who, at this moment, finds himself very much in the eye of the storm.

Q: OK, nice hat -- but what exactly is Project Cubbins, anyway?
A: One man's homage to Dr. Seuss and his second book, "The 500 Hats of Bartholemew Cubbins," which is celebrating the 75th anniversary of its publication in 2013, Project Cubbins is an attempt to document the wearing of a different hat or piece of headgear every day for 500 consecutive days. No do-aheads, no banking of hats, no retroactive entries. PC started on May 27, 2013 with Hat 1. Got hats? If you loan 'em, you'll get e'm back safe and sound!
Posted by Adam Tschorn at 10:13 AM