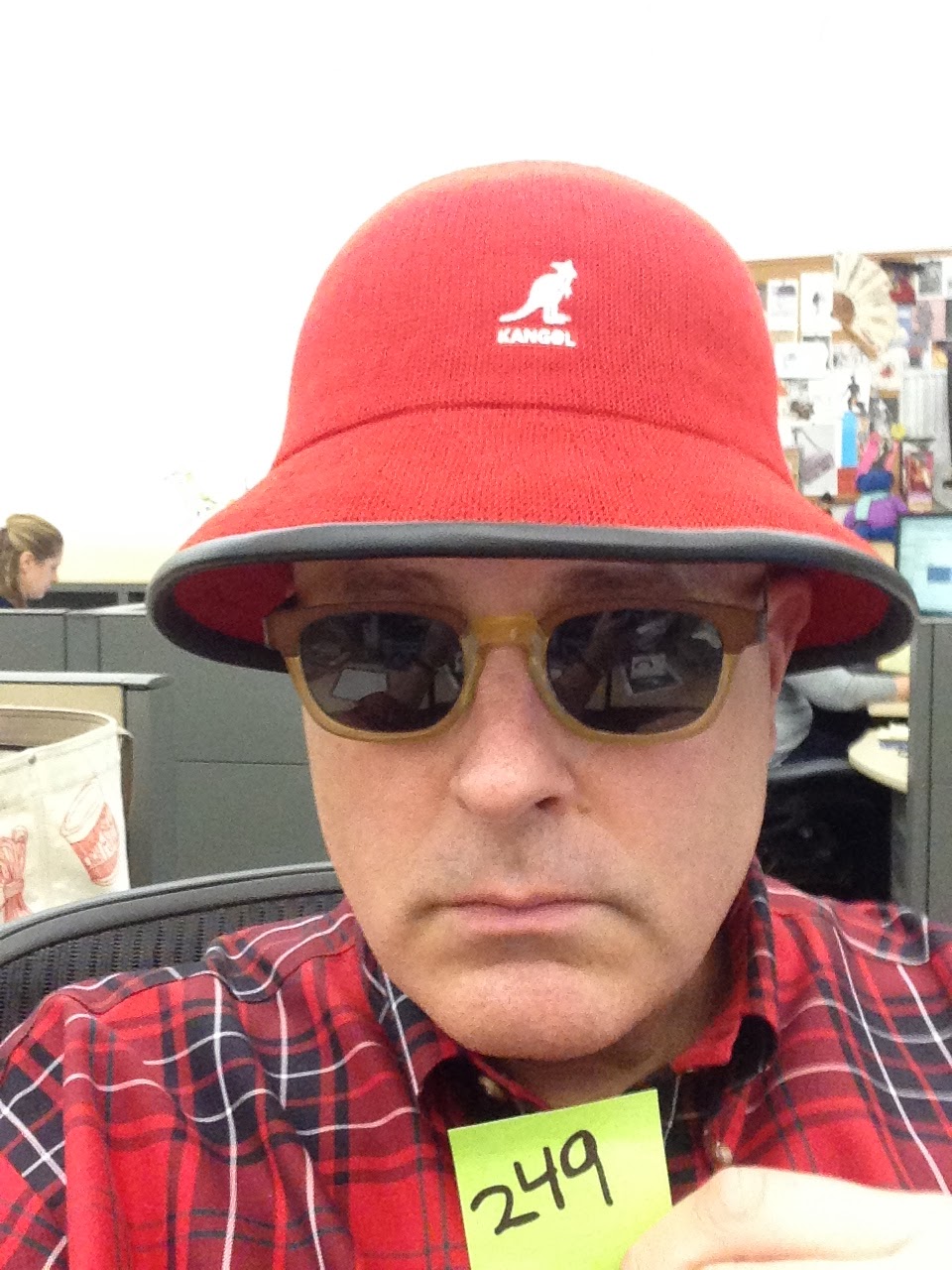 Day 249 / Hat 249: Scarlet red Kangol "Casual" style bucket hat with navy blue contrast edge and red, white and blue striped headband and white embroidery on front of kangaroo logo and brand name . The interior tag tells us the hat is 54% acrylic and 46% worsted wool and the headband is 100% nylon.

While the Project has had several Kangol caps in the mix over the last 248 installments (see PC 225: Mr. Bubble Player), my "safety hat" from last New York Fashion Week (PC 103) and a really early addition (PC 8), this one, described at website as blending "the classic shape of the Casual with inspiration from the famous Monty Beret" is special - for two reasons.

First, it's a special hat from Kangol's Spring/Summer 2013 collection that marks the label's 75th anniversary. (A fact noted in a navy blue patch sewn into the inside of the crown, which includes the kangaroo logo, the dates 1938-2013 and  the words "established in England.")

As such, the hang tag attached to this natty lid is jam-packed with brand history and the kind of trivia that makes me full on drool. Among the facts now in my head because of the hat on top of it:

-- Kangol was founded in 1938 by a gent named Jacques Spreiregen who came up with the name by "combining the K from knitting, the ANG from angora, and the OL from wool."

-- The label provided berets to the British army during WWII.

-- The Kangol kangaroo logo was a relative latecomer, introduced in 1983. (Responsible, no doubt, for the mistaken belief by some that the brand hails from Australia.)

The second reason the hat is special is that it's the first of what promises to be deep bench of hats graciously loaned to the Project by members of The Headwear Association -- a trade organization that dates to 1908 and has the stated mission of  "promoting hats and headwear awareness worldwide." Two huge boxes arrived at Cubbins Central today and this was the first one I plucked out (it also happened to match my shirt).

So a sincere hat-tip to The Headwear Association and belated 75th anniversary congratulations to Kangol.