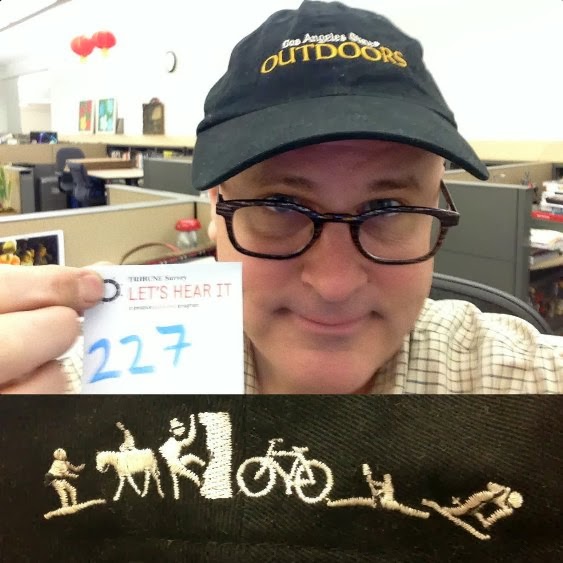 Day 227 / Hat 227: Black, 100% cotton, made-in-China, baseball-style cap with embroidery on front that reads: "Los Angeles Times" (in white and in a font approximating that used on the front page of the paper) above the word "Outdoors" (in gold and all capital letters). Additional white embroidery on back of hat (see detail in above photo) depicts various outdoorsy activities including surfing, horseback riding and mountain climbing.

Loaned to the Project by the always generous Team Boucher, this hat references the LAT's now-shuttered standalone Outdoors section, which launched on September 9, 2003, and published for the last time on December 6, 2005.

In that final issue, then section editor Tom Curwen (who currently sits three cubicles north of me when he's not off chasing bears) has some eloquent parting words that are a must-read in his column titled "Onward and Outward - some lasting words as Outdoors rides off into the sunset."

While today's tip of the hat goes first and foremost to Team Boucher, I feel a secondary doffing is in order here to Tom Curwen, Bob Sipchen (the Outdoor section's editor at launch) and all who worked hard to bring the great outdoors inside on the pages of that section.

Q: OK, nice hat -- but what exactly is Project Cubbins, anyway?
A: One man's homage to Dr. Seuss and his second book, "The 500 Hats of Bartholemew Cubbins," which is celebrating the 75th anniversary of its publication in 2013, Project Cubbins is an attempt to document the wearing of a different hat or piece of headgear every day for 500 consecutive days. No do-aheads, no banking of hats, no retroactive entries. PC started on May 27, 2013 with Hat 1. Got hats? If you loan 'em, you'll get e'm back safe and sound!
Posted by Adam Tschorn at 10:03 AM