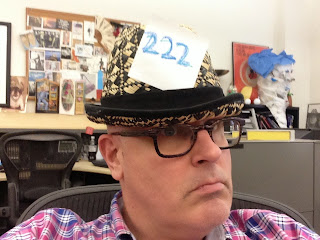 Day 222 / Hat 222: Straw, stingy brim fedora in a woven, geometric pattern of black- and natural-colored straw. Black hatband on exterior and sweatband on interior appear to be cotton. Interior tags reads: "Livitiy Outernational" on one side and "Wisdom, knowledge and overstanding," on the other. Second tag reads: "L/XL, 100% natural straw, made in China with love."

I don't know much about Livity, but I do appreciate tag-related word play, which this hat has in spades.

Loaned to the Project from Ingrid Schmidt (who obviously has a thing for fedoras - collecting them if not wearing them), it's one of the deep bench of hats stacked at my office cubicle.


Q: OK, nice hat -- but what exactly is Project Cubbins, anyway?
A: One man's homage to Dr. Seuss and his second book, "The 500 Hats of Bartholemew Cubbins," which is celebrating the 75th anniversary of its publication in 2013, Project Cubbins is an attempt to document the wearing of a different hat or piece of headgear every day for 500 consecutive days. No do-aheads, no banking of hats, no retroactive entries. PC started on May 27, 2013 with Hat 1. Got hats? If you loan 'em, you'll get e'm back safe and sound!
Posted by Adam Tschorn at 6:09 PM