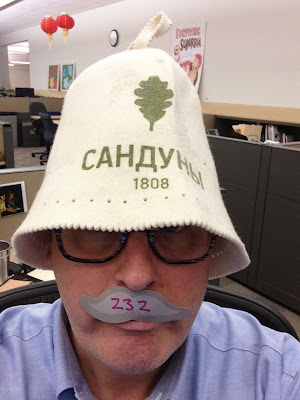 Day 232 / Hat 232: Bell-shaped white wool felt hat with green printing that reads: "Сандунах 1808." This is the first in a troika of toppers generously sent to the Project by old college chum Steve Konigsberg who currently lives and works in Moscow, Russia.

The package o' hats arrived a week ago but my buddy was on holiday in Vietnam (yup - he's the kind of guy who vacations in 'Nam)  so I've kind of been cooling my heels waiting for a little bit of background on the headgear.

It turns out that for this peculiar lid I needn't have waited for any intel. My fellow cube farmer, Chris Reynolds (the same guy who created the awesome "Road to 500 Hats" video), took one look at it and and said "Sanduny Baths." One of our travel writers, Chris had been to Russia in January 2013 and recognized the name and logo as belonging to Sanduny Bathhouses.

Of it Konigsberg writes:"It is a typical banya hat but from the Studio 54 of Russian/Soviet  banyas." The 1808 date is when the place first opened and the building it occupies at 14 Neglinnaya street is, according to its Wikipedia entry, "a cultural and architectural landmark."

If you're unclear on what a banya is, here's a little descrition (courtesy of Russiapedia),: "Originally banya is a steam bath with a stove. Nowadays any type of bath or sauna is usually called banya in Russia and other former USSR countries."

I'd never heard of such a creature as a banya hat, but a little poking around the web turns up the fact that wool felt caps of this shape are traditionally worn in the sauna and contrary to what you might think actually help keep the head and hair cooler for longer and help sauna-going folks endure the high temperature for a longer period of time than they might otherwise. (Cedarbrook Sauna and Steam, based in Washington state, offers their own version of the caps -- along with a little description -- at their website.)

Based on what I've read, the lanolin and absorbent properties of natural sheep's wool makes it a preferable choice for such caps.

So a sincere tip of the bath hat goes to Steve for sending it along. We have to assume it was no sweat on his part.

Q: OK, nice hat -- but what exactly is Project Cubbins, anyway?
A: One man's homage to Dr. Seuss and his second book, "The 500 Hats of Bartholemew Cubbins," which is celebrating the 75th anniversary of its publication in 2013, Project Cubbins is an attempt to document the wearing of a different hat or piece of headgear every day for 500 consecutive days. No do-aheads, no banking of hats, no retroactive entries. PC started on May 27, 2013 with Hat 1. Got hats? If you loan 'em, you'll get e'm back safe and sound!
Posted by Adam Tschorn at 10:10 AM