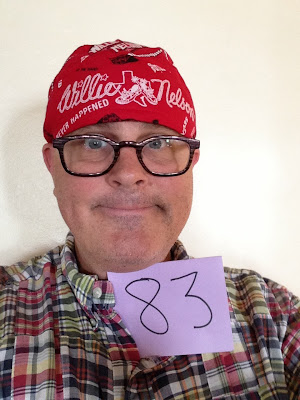 In addition to Nelson's name and a sort-of likeness of the musician, the head wrap is emblazoned with other appropriate imagery including an outline of the state of Texas,, stars, musical notes, lasso-like ropes and snippets of  song titles ("Crazy," "Pick Up the Tempo," "Night Life" and "Blue Eyes Crying in the Rain" are among them).

This is the third (yes, third) piece of headgear to come out of the the Aug. 9 Willie Nelson and Family concert at the Hollywood Bowl. (You can catch up on the first two Willie lids here and here.)

What makes this do-rag a little different is that it's already shaped to fut the head and simply requires the two ends in the back to be tightened against the head. An added bonus? There's a strip of terrycloth hidden inside the head wrap where it sits against the forehead.