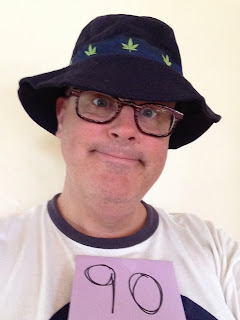 In case you thought it was something else entirely, Boast's party line is that its logo is actually a Japanese maple leaf (binomial name acer palmatum).

The bride and I bought this hat barely a few hours ago at Boast's freshly popped Los Angeles pop-up at 8366 1/2 West Third Street (between Sweetzer and Orlando) where we had the distinction of making the very first purchase of the brand's month-long local run.