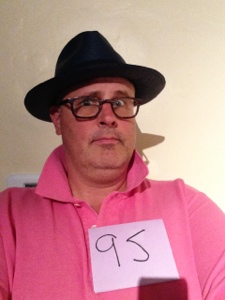 This was probably the latest entry to date. I prefer to get my head wrapped around the day's hat on the front end since I live in fear of missing an installment.

After a fantastic day at the beach, we were lying in bed watching Robert Altman's "Prêt-à-Porter" (since the cast includes Lyle Lovett with whom I'd had the honor of speaking earlier in the day for an upcoming story) when Tracey Ullman's character Nina Scant appeared on screen wearing a fuzzy, out-sized, bottle-green top hat.

I bolted out of bed and headed to the bride's closet in search of hat, and this was the first one I could get my paws on.

Of it the Bride says: "I like it because navy blue is an unexpected color for a hat."

Great tips, many thanks for sharing. I have printed and will stick on the wall! I like this blog. Embroidery Miami