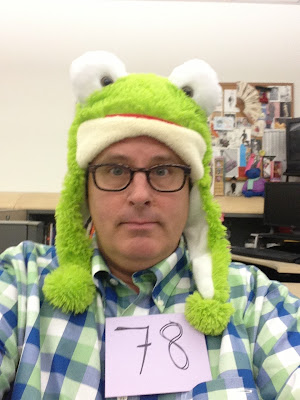 Although this is decidedly not a Kermit the Frog hat (but you knew that), it does remind me of him just a tiny bit and of his next big screen appearance, which will be in "Muppets Most Wanted" set to hit theaters March 21.
A snippet of the movie was screened at the D23 Expo in Anaheim over the weekend and fans of our little green friend will be happy to know he (well, technically he and his criminal mastermind doppelganger) get a lot of face (sock?) time in the new flick.

On a related but somewhat random note, I recently ran across  "Plaza Sésamo" - the Spanish-language version of "Sesame Street" - while channel-surfing. On that show, Kermit goes by the name "René," Bert and Ernie are known as "Beto y Enrique" and the large feathered creature is not actually Big Bird at all - but his out-sized parrot cousin "Abelardo Montoya."