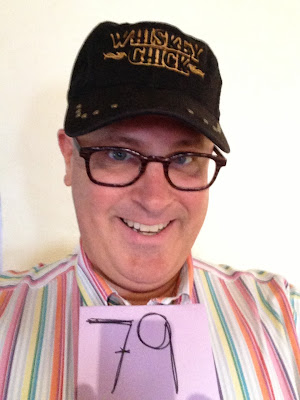 Purchased by the Bride at the recent  and oh-so-memorable Willie Nelson concert at the Hollywood Bowl (which, you may or may not recall,  also gave us a smokin' Hat 76).

On a side note: If you're like me and have a hard time remembering when the potent potable is spelled whiskey (with an "e") or whisky (without), I learned a good rule of thumb while reading Michael R. Veach's "Kentucky Bourbon Whiskey: An American Heritage."

According to Veach, the "e" is traditionally used whilst (I love that word) referring to a product made by distilleries in countries that were traditionally allied with the Colonies that would eventually become the United States or stood in some kind of opposition to the British crown (I'm paraphrasing here) -- such as Ireland and, of course, the U.S. Drop the "e" for whisky from countries loyal to the Crown - such as Scotland and Canada.

Of course this is only a general rule -- Maker's Mark, for example, is made in the U.S. but does not take the "e," using a spelling that I believe is intended to reflect the founding family's Scottish heritage.