Project Cubbins: Hat Seventy-Six - "Roll Me Up & Smoke Me" Edition 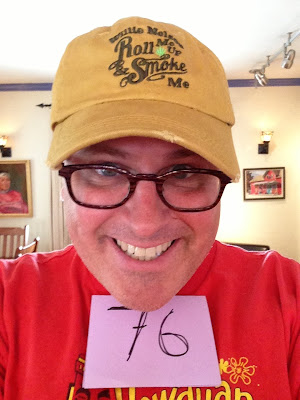 Day Seventy-Six / Hat Seventy-Six: Mustard yellow cotton baseball-style cap with embroidery that reads: "Willie Nelson" and "Roll Me Up & Smoke Me" on the front and '"2012 Willie, Whiskey & Weed" on the back.

This hat was one of two purchased at last night's Willie Nelson concert at the Hollywood Bowl. (Don't worry -- you know you'll eventually see the other one.) Thanks to the Admiral our seats were so close to the stage that if someone had, in fact, rolled Willie up and started to smoke him, they would have been able to easily pass him in our direction.

The show was one for the books, with Nelson performing the entirety of his 1978 album "Stardust," which happens to include "Moonlight in Vermont" -- the song to which the Bride and I first danced as a newly married couple at our wedding a decade ago.

When Nelson launched into the song, I took the Bride's hand and whisked her out to aisle where we reprised our wedding dance -- much to the chagrin of the ushers -- right down to the final dip. It was a truly magical, memorable moment that left me with an intoxicating high.

And one that absolutely nothing to do with whiskey or weed.