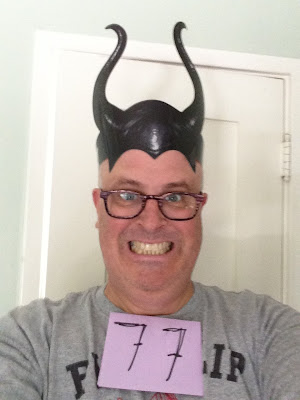 This was the most popular headgear being sported at the D23 Expo at the Anaheim Convention Center yesterday -- due in no small part to the fact that they were a promotional giveaway for the upcoming film that were being handed out left and right. By the end of the day it looked less like a convention center packed with fans and more like the African veldt swarmed by herds of evil gazelles.

A clip of the movie, which tells the Sleeping Beauty fairy tale from the point of view of the witch, was shown at the studio's live action presentation on Saturday at which Angelina Jolie -- who plays the title witch -- made a brief appearance and shared some of her experiences from working on the film.

One of her favorite memories? "When I got my horns for the first time," she told the room full of fans.

And, we do have to admit they are some pretty bad-ass horns - these paper don't do the big-screen version justice -- and we suspect we'll see a lot more of them as next summer's release date nears.