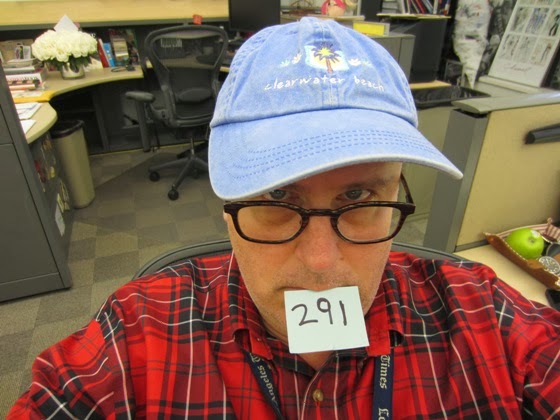 This l'il lid comes to the Project by way of the SJTBOH, and I'm going to guess it came into her possession during one of the family's jaunts to Florida since there's a family compound in Clearwater across the

Speaking of the SJT Bag o' Hats, shortly after posting it, I got some closure on PC 289 (aka "the stumper bucket"). Of its provenance, Sue says it was from the tenth birthday party she had organized for my nephew/godson Spencer.

Sue writes: "Bought [a bunch of hats] at a close-out discount store and sent home with young lads. Birthday theme was fishing, so kids were given the lids to keep sun & hooks out of their faces!"

Now that's using your head. Sounds like another version of the safety hat, no?


A: One man's homage to Dr. Seuss and his second book, "The 500 Hats of Bartholemew Cubbins," which is celebrating the 75th anniversary of its publication in 2013, Project Cubbins is an attempt to document the wearing of a different hat or piece of headgear every day for 500 consecutive days. No do-aheads, no banking of hats, no retroactive entries. PC started on May 27, 2013 with Hat 1.
Got hats? If you loan 'em, you'll get e'm back safe and sound!
Posted by Adam Tschorn at 10:03 AM