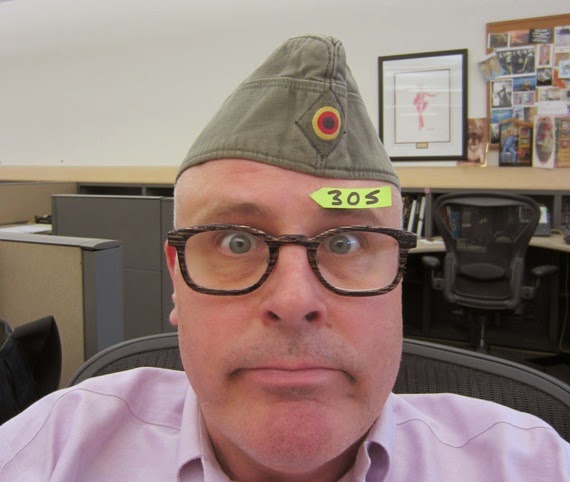 Day 305 / Hat 305: Vintage olive drab Bundesheer (German Army) garrison cap with West German national cockade in gold, red and black embroidered on a diamond-shaped background on front. According to the interior tag (photo below right - there's no way I'm typing all that), it was manufactured by Erich Fritzsch, Bebra, Germany 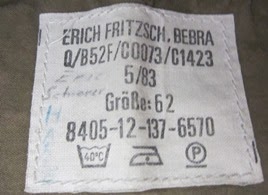 Purchased for the Project (for the princely sum of $4.95) at the Surplus Value Center on Sunset Blvd. in Silver Lake.

Adding this narrow little cap to my holdings seriously broadened my knowledge base by adding "garrison cap" and cockade" to my my vocabulary, it also resulted in finding a sweet resource -- the Wilson History & Research Center which focuses specifically on military headgear and from which I've plucked the following information about the above hat and similar ones in other branches of the German military:

"West German Bundeswehr (military) continued to use garrison caps. The cap color corresponded to the uniform being worn. The Bundesheer (Army) wore a light green-grey garrison cap, the Air Force a blue and light green, and the Navy wore a dark blue. Each cap had a similar style with a thin body and high side flaps. The flaps did not slope in the front like their World War II predecessors. On the front of each cap was a West German national cockade on a diamond backing of the same color as the cap. Various piping was used around the caps edging, such as yellow piping on the blue cap worn by the Air Force. ... Today, the unified German military has moved away from the garrison cap, like many modern militaries, and has adopted the beret as a replacement." (History by Samuel Grubb)

A cock of the cockaded cap to the WHRC for the deep bench of knowledge. Next time I get a military lid I'm marching back to the website -- double-time.

A: One man's homage to Dr. Seuss and his second book, "The 500 Hats of Bartholemew Cubbins," which is celebrating the 75th anniversary of its publication in 2013, Project Cubbins is an attempt to document the wearing of a different hat or piece of headgear every day for 500 consecutive days. No do-aheads, no banking of hats, no retroactive entries. PC started on May 27, 2013 with Hat 1.
Got hats? If you loan 'em, you'll get e'm back safe and sound!
Posted by Adam Tschorn at 7:31 PM