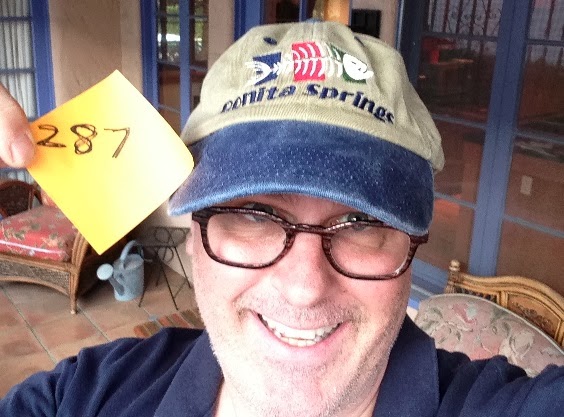 Day 287 / Hat 287: Khaki-colored, baseball-style cap with blue bill and multi-color embroidery on front that reads: 'Bonita Springs," beneath an embroidered white fish skeleton against a background of embroidered blue, red and  green quadrilaterals.

Grabbed from the SJTBOH at random but totally appropriate as clocks were to "spring ahead" an hour to begin observance of Daylight Saving Time today.

The city of Bonita Springs, Florida, (slogan: "Small Town Charm. Big Bright Future") is on the Gulf Coast of Florida, south of Fort Meyers, Based on the location, I'm going to take a wild guess that this hat was procured during a visit by my sister's family to her in-laws (who, last I knew, hung their hats not too awfully far north of BonitaSpring in Punta Gorda).

I tried to get to the bottom of the fish skeleton logo/mascot thing - it seemed like an odd thing to represent civic pride -- although I think Maine license plates had a red (as in boiled and dead as a doornail) lobster on its license plates at one time, didn't it? Apparently the city's mascot is (or at least was) a fish named Sammy the Snook. But in all the photos I found, he was pictured with all his soft parts in place.

There is a also restaurant located in Bonita Springs called the Bonefish Grill -- but the skeleton logo was facing the opposite direction.

The only conclusion I can come to is that the hat's embroidery is in some way a reference to something like Mound Key Archeological State Park located in nearby Estero, which included the following skeleton-appropriate description:

"Prehistoric Native Americans are credited with creating this island's complex of mounds with an accumulation of seashells, fish bones, and pottery."

At any rate, on the day we spring ahead, that's the explanation I'm gonna fall back on.

A: One man's homage to Dr. Seuss and his second book, "The 500 Hats of Bartholemew Cubbins," which is celebrating the 75th anniversary of its publication in 2013, Project Cubbins is an attempt to document the wearing of a different hat or piece of headgear every day for 500 consecutive days. No do-aheads, no banking of hats, no retroactive entries. PC started on May 27, 2013 with Hat 1.
Got hats? If you loan 'em, you'll get e'm back safe and sound!
Posted by Adam Tschorn at 6:52 PM