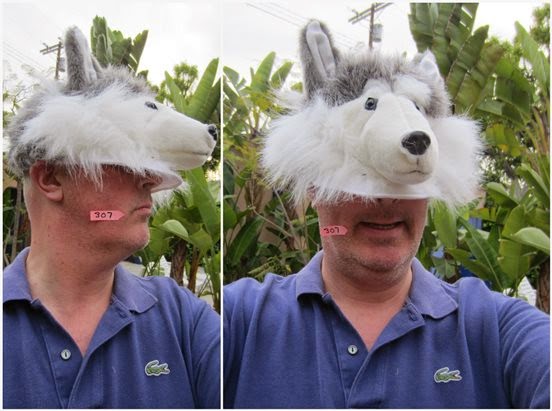 Day 307 / Hat 307: Gray and white novelty cap in the shape and coloration of a Siberian Husky (at least that's the breed it appears to be to my non-dog-specific eye) with black plastic eye lids (set with black and light blue plastic eyeballs) and black plastic nosepad.

Interior tag reads: "All new material consisting of 100% polyester and plastic pellets, made in China, Green Trading Co., USA, CA," and hangtag reads: "Bear Paw Plush," on one side and: "Surface washable, tumble dry, not for under 3 years of age," on the other.

Purchased specifically for the Project earlier today at a store in the Farmers Market at Third and Fairfax because it reminded me of the 16 residents of  Tsan Tsulan, my brother Al's (and sister-in-law Suzanne's) kennel of canines. (I think the tally is currently 16 -- at least that's the current tally at the website -- where you can meet each of the dogs.)

I'm not sure how Al's dogs would react if they saw me sporting this hat -- I do know the two cats who share our abode here are none to pleased with me as I walked around the house with it atop my head. I'm sure whatever the response, it would be an interesting exercise in pack dynamics.

Today's honorary hat-tip goes to the four-footed friends of Al & Suzanne -- and all Siberian Huskies wherever they roam and whomever's sled they're pulling.