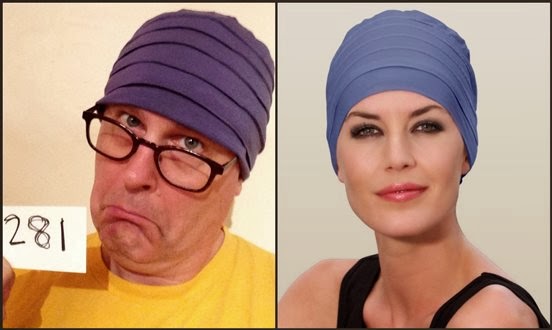 A loaner from The Headwear Association sample closet, when I first pulled this out of the box I actually thought it was a bag some other hat had been packaged in. I'll have to admit it IS super-comfy, but I don't look anywhere near as styling as the lady modeling it in the photo I found when I typed the style number into the interweb.

As for the "yoga" part of the yoga turban (that was the description I found for the free form lid at the label's website), well, the old Internet doesn't disappoint, serving up a blog post titled (I kid you not): "What's With the Turban?" from a site called Kundalini Yoga Boston.

There's apparently a whole bunch of reasons why headgear of the turban persuasion is helpful on the yoga mat. You can read the list in its entirety at the site but here rare a couple to give you a little flavor:

" -- Covering the head enables you to command your sixth center, the Ajna Chakra"

" -- Turbans in particular are useful for holding energy in, and for creating a meditative focus at the third eye point (brow point)."

When I read that last one I quickly snatched the yoga turban from my head. Trust me, the last thing anyone needs (especially me) is to hold any energy in.

So today's hat-tip (and a downward dog) goes to Denmark-based Christine Headwear, a company, it's worth pointing out, specializes in the making all manner of scarves, caps and head coverings for women who have lost their hair due to illness and disease. On second thought, they deserve a double hat-tip for that laudable endeavor.

ALSO:
PC 280: Porch Derby
PC 279: Gull Skull
PC 278: Spago AmigoQ: OK, nice hat -- but what exactly is Project Cubbins, anyway?
A: One man's homage to Dr. Seuss and his second book, "The 500 Hats of Bartholemew Cubbins," which is celebrating the 75th anniversary of its publication in 2013, Project Cubbins is an attempt to document the wearing of a different hat or piece of headgear every day for 500 consecutive days. No do-aheads, no banking of hats, no retroactive entries. PC started on May 27, 2013 with Hat 1. Got hats? If you loan 'em, you'll get e'm back safe and sound!
Posted by Adam Tschorn at 7:43 PM