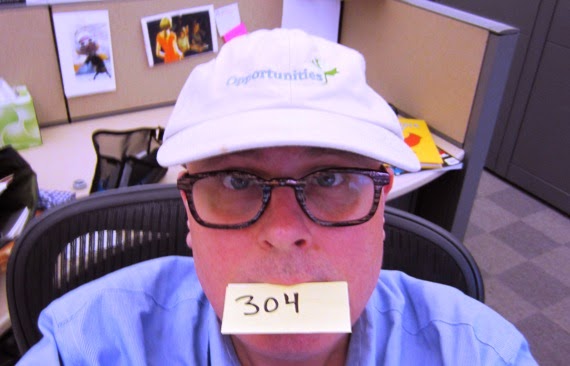 Day 304 / Hat 304: Khaki-colored baseball-style cap with blue-green embroidery detail on front that reads: "Opportunities" followed by an embroidered maple leaf in two shades of green. Embroidery on back of cap reads: "Credit Union" in a blue-green shade that matches "Opportunities." Interior tag reads: "Alternative Apparel" on one side and "RN# 98269, 100% cotton, made in China" on the other.

A blind grab from the SJBOH, at first I thought "opportunities" was simply one of those banking slogans you hear all the time ("Chase what matters . blah, blah, blah") but it turns out it's the actual name of a Winooski, Vermont, based credit union. (I'm hazy on this but my bro-in-law may have hung his work hat there at one point).

According to its website, Opportunities is "Vermont's only community development credit union." What is that you might ask? (I know I did.) Here's a little explanation from its site:

"As a community development credit union, Opportunities is chartered specifically to serve the financial needs of low income, un-banked and underserved populations and we are permitted to accept 'non-member' deposits.  These deposits come from 'non-members' who do not meet Opportunities traditional field of membership and include: banks, credit unions, corporations, foundations, government agencies, faith based organizations, non-profits and social investors, who are allowed to invest in Opportunities  in order to ensure that all Vermonters have access to affordable financial services."

So there you have it. A hat-tip to the broham-in-law (even if he didn't work there dude man deserves at least one for marrying into this crazy family, methinks) and golf claps to Opportunities both initial-capped and otherwise wherever they may be.

A: One man's homage to Dr. Seuss and his second book, "The 500 Hats of Bartholemew Cubbins," which is celebrating the 75th anniversary of its publication in 2013, Project Cubbins is an attempt to document the wearing of a different hat or piece of headgear every day for 500 consecutive days. No do-aheads, no banking of hats, no retroactive entries. PC started on May 27, 2013 with Hat 1.
Got hats? If you loan 'em, you'll get e'm back safe and sound!
Posted by Adam Tschorn at 5:25 PM