Day 282 / Hat 282: Purple, gold, green and yellow six-point jester's cap with metallic polka dots in the same colors and metal bells on the end of each point. Interior tag reads: "100% polyester, made in China, manufactured for Amscan Inc., Elmsford, NY."

This hat, n case you didn't realize it, is in the seasonally appropriate color scheme of Mardis Gras, and is on loan from the Noelle Carter Home for Happy Headgear. We've been looking forward to plopping a Fat Tuesday hat on my fat head for a week now, but the first one she offered up, seasonal as it was, was a non-starter.

But only for a very narrow technical reason. See, I'd already worn it -- way back on Day 88 (Ah, remember back in the double digits when life was so uncomplicated?) But Carter doubled down, went out to her car, and came back with this awesome lid. (I mean, who doesn't love a co-worker who keeps a spare Mardi Gras hat in her car?) 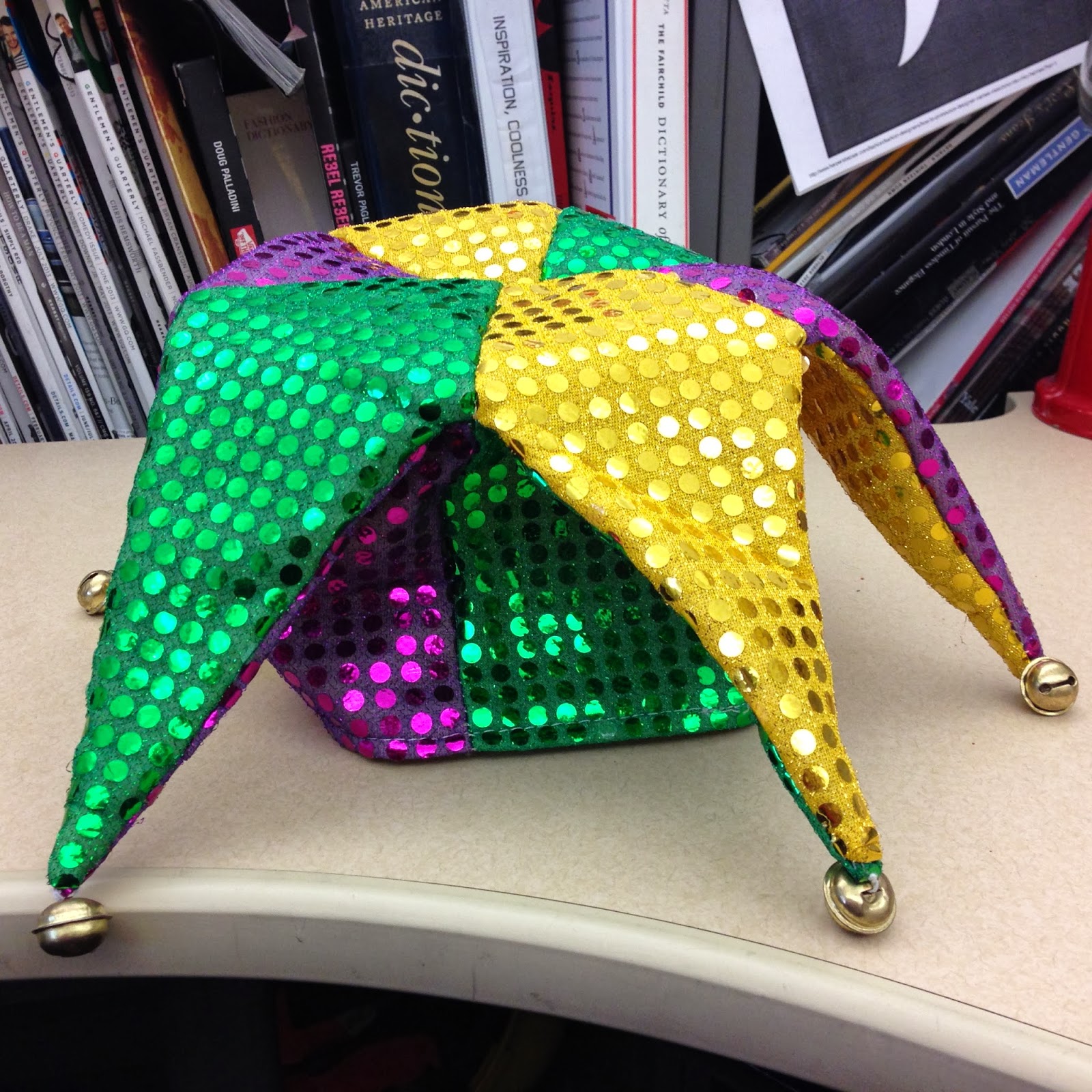 I did a quick look back in the Project archives to make sure this wasn't also a violation, since I'd faintly remembered her offering up a jester's cap in the past and wouldn't you know it, she's actually loaned TWO jester hats to the Project in the past (PC 37 and PC 65) but thankfully neither were the exact same hat as this confection.

So Noelle has done something quite special -- served up a hat-trick of jester caps (fans of the old "Joker's Wild" game show might do what I did and say aloud: "JOKER, JOKER JOKER!).

So a sincere hat-tip to Noelle, and may all of celebrating National Pancake Day find a baby in your slice of King cake (Tom Curwen found two in his slice here in the Cube Farm today ....).

A: One man's homage to Dr. Seuss and his second book, "The 500 Hats of Bartholemew Cubbins," which is celebrating the 75th anniversary of its publication in 2013, Project Cubbins is an attempt to document the wearing of a different hat or piece of headgear every day for 500 consecutive days. No do-aheads, no banking of hats, no retroactive entries. PC started on May 27, 2013 with Hat 1.
Got hats? If you loan 'em, you'll get e'm back safe and sound!
Posted by Adam Tschorn at 4:47 PM