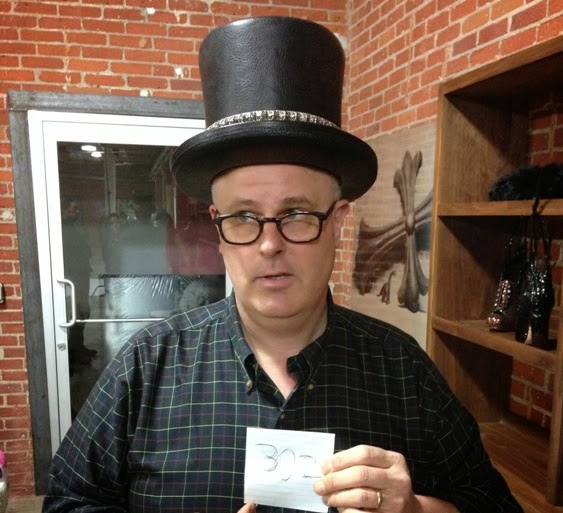 When I first pointed to the hat -- sitting on a shelf (partially visible behind me) in one of the many buildings that make up their Hollywood "campus," the Starks said: "Oh, the Slash hat." They explained that it was the prototype of an original hat they had created for the musician who wears a similar trademark topper.

While I have no indication that Slash himself ever wore this particular hat, and a brief survey of the interwebs reveals that the man formally known as Saul Hudson has sported many different Chrome Hearts creations over the course of his career (and, more than likely all manner of millinery not made by Team Stark), when it comes to logging lids for the Project, I'll take the proximity of a prototype any day of the week.

A sincere hat tip to Richard and Laurie Stark and daughter Jesse Jo -- the last of which also gets the assist for shooting the shot as I briefly wore the heavy (and I mean seriously heavy) one-of-a-kind piece of headgear.

Q: OK, nice hat -- but what exactly is Project Cubbins, anyway?
A: One man's homage to Dr. Seuss and his second book, "The 500 Hats of Bartholemew Cubbins," which is celebrating the 75th anniversary of its publication in 2013, Project Cubbins is an attempt to document the wearing of a different hat or piece of headgear every day for 500 consecutive days. No do-aheads, no banking of hats, no retroactive entries. PC started on May 27, 2013 with Hat 1. Got hats? If you loan 'em, you'll get e'm back safe and sound!
Posted by Adam Tschorn at 6:06 PM