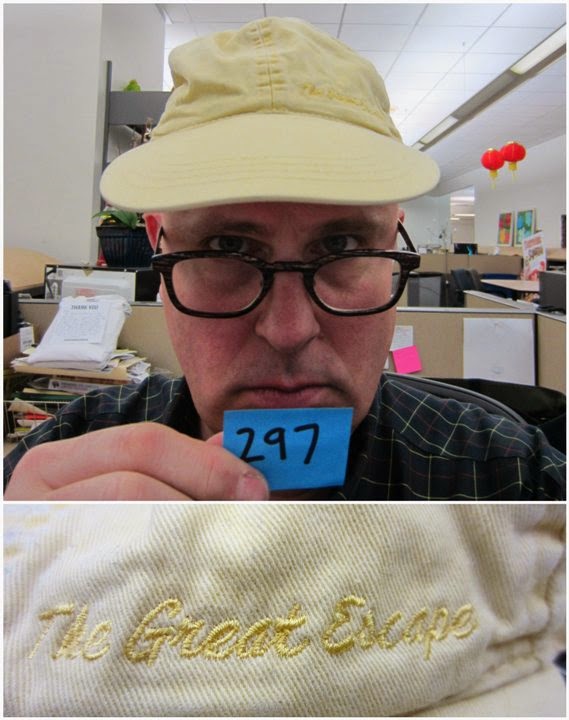 Day 297 / Hat 297: Pale yellow, washed-down, baseball-style cap with yellow tone-on-tone cursive embroidery detail on front that reads: 'The Great Escape." Interior tag reads: "J Hats" on one side and: "Adult, 100% cotton, made in China" on the other.

Pulled from the SJTBOH pretty much at random, the more I think about this hat,the more it makes me laugh. I've had an intense dislike of yellow lettering that traces all the way back to a childhood attempt to make one of those colorful signs (as kids are wont to do) in which each letter was rendered in a different color Magic Marker. It always annoyed me that the yellow letters would inevitably do one of two things: fade into nothingness against a light-colored background, or disappear into a dark-colored one.

What makes me chuckle about this hat in particular is that yellow embroidery might actually have stood out -- on anything other than a yellow background. And the size and placement of the embroidery makes me scratch the head beneath the hat since the result is the theme park's name rendered so stealthily that the only person who might actually be able to read it off your hat could probably also smell the Dippin' Dots and Dutch Funnel Cake on your breath.

Q: OK, nice hat -- but what exactly is Project Cubbins, anyway?
A: One man's homage to Dr. Seuss and his second book, "The 500 Hats of Bartholemew Cubbins," which is celebrating the 75th anniversary of its publication in 2013, Project Cubbins is an attempt to document the wearing of a different hat or piece of headgear every day for 500 consecutive days. No do-aheads, no banking of hats, no retroactive entries. PC started on May 27, 2013 with Hat 1. Got hats? If you loan 'em, you'll get e'm back safe and sound!
Posted by Adam Tschorn at 5:02 PM