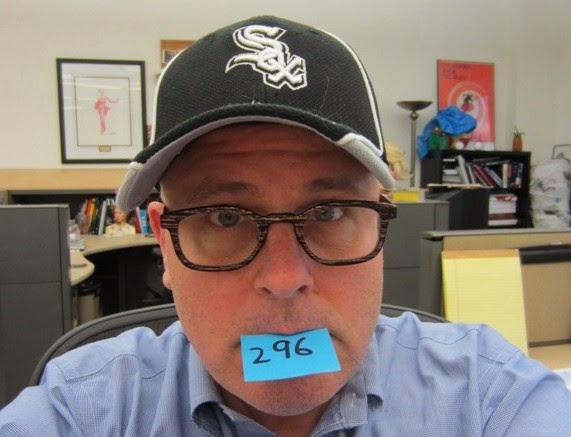 I have no idea where this originally came from but it's been sitting in the trunk of Diamond White for years as another "safety hat" (as in safety from the sun) and I unearthed it while scrounging for PC 290.

The "Sox" in question are Major League Baseball's Chicago White Sox of course, a team that dates to 1894 and got its start as the minor league Sioux City Cornhuskers before becoming the White Stockings after a 1900 move to Chicago (apparently taking sloppy seconds by adopting a nickname once used by the Chicago Cubs).

Since I've never been much of a baseball person, when ever I see this hat, its predominantly black color scheme (in the words of Spinal Tap: "How much more black could this be?") automatically takes me to the Black Sox Scandal of 1920 in which eight of the players were accused of playing to intentionally lose the 1919 World Series against the Cincinnati Reds (the subject of the 1988 film "Eight Men Out" and referenced in "Field of Dreams" the following year).

The team's mascot, by the way, is Southpaw, which according to Wikipedia is a reference to not only to the term for a left-handed pitcher but also "to Chicago's South Side where the team plays."

As a proud left-hander, I thought I knew the origin of the term "southpaw" as slang (particularly in sports) for a left-handed athlete, and had a vague memory of it being tied to a particular Chicago ballpark. The legend goes that in this particular diamond was laid out east to west with home plate to the west so those pitching with their left were doing so with their south (facing) paw.

Even the most cursory search of the interwebs reveals that to be a bit apocryphal, with that "coining" of the term, being traced to humorist writer Finley Peter Dunne of the Chicago News (apparently the phrase was in use, one site notes, "before Dunne's birth.")

So next time I'm asked the origin of the phrase I am so not going to raise my left hand.
\
[*Updated 11:06  a.m.: A hat-tip to Jennifer Altman for pointing out I was going all "Groundhog Day" by reliving Day 295 for a second day. The number in my mouth is right, the one above my head was not. I have duly noted.]

A: One man's homage to Dr. Seuss and his second book, "The 500 Hats of Bartholemew Cubbins," which is celebrating the 75th anniversary of its publication in 2013, Project Cubbins is an attempt to document the wearing of a different hat or piece of headgear every day for 500 consecutive days. No do-aheads, no banking of hats, no retroactive entries. PC started on May 27, 2013 with Hat 1.
Got hats? If you loan 'em, you'll get e'm back safe and sound!
Posted by Adam Tschorn at 10:14 AM