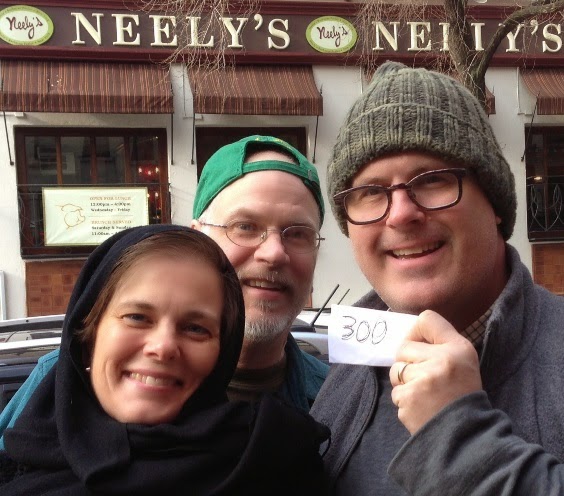 Day 300 / Hat 300: Dark green, hand-knit cap borrowed from my brother Al (pictured center, wearing my hat).
Since we're marking the big 300 hat-wise I decided to throw in a third Tschorn - that'd be sister Sue of the SJTBOH and she's the one at left with the black scarf wrapped around her head all babushka like.

Photographed by sister-in-law Suzanne at the corner of 62nd and York in Manhattan. The hat was hand knit by our sister Sara-Lynn.

"She sent it to me in a recent care package and I've pretty much been wearing it ever since," Al said.
Except of course, for the brief moment I borrowed it for purposes of the above picture.

Three peas in a pod (wearing a hat knit by the outside-the-pod fourth pea) feels like a perfect way to mark the big 300th hat.

A: One man's homage to Dr. Seuss and his second book, "The 500 Hats of Bartholemew Cubbins," which is celebrating the 75th anniversary of its publication in 2013, Project Cubbins is an attempt to document the wearing of a different hat or piece of headgear every day for 500 consecutive days. No do-aheads, no banking of hats, no retroactive entries. PC started on May 27, 2013 with Hat 1.