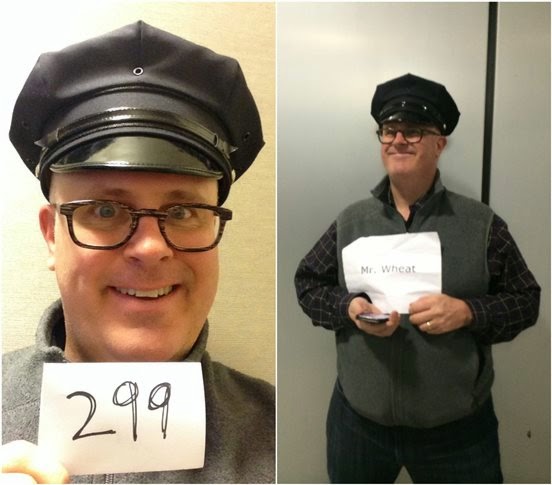 Additional detail includes brown leather-like interior sweatband. Hangtag says: "Rothco, combat tested since 1953," on one side and: "made in China, www.rothco.com" on the other.

Purchased last Saturday specifically for the Project from the Surplus Value Center in Silver Lake - and specifically in anticipation of today.

That's because I'm meeting* my brother (aka Mr. Wheat) at the train station and once we'd finalized plans he said: "Wouldn't it be funny if you met me there in a tuxedo and a limo driver's cap and a sign with my name on it?"

Why yes, methinks it would. And while the tux would've been a nice touch, I think the lid (and sign I'll be holding) will do just nicely. (Part of me thinks he knew full well I'd take the bait.)

Yes, I'm sort of fudging it with what's more of a cop cap than a standard-issue limo driver's lid but my choices were either this or a yachting cap which, given my distinct body shape and penchant for polos, makes me look like I'm impersonating the skipper from "Gilligan's Island."

*[Updated: My sister Sue snapped the photo on the right at Penn Station upon their arrival -- proof that if nothing else I'm a man of my word.]

Related:
PC 298: Green MountainsPC 297: Yellow Letters
PC 296: White Sox
Q: OK, nice hat -- but what exactly is Project Cubbins, anyway?
A: One man's homage to Dr. Seuss and his second book, "The 500 Hats of Bartholemew Cubbins," which is celebrating the 75th anniversary of its publication in 2013, Project Cubbins is an attempt to document the wearing of a different hat or piece of headgear every day for 500 consecutive days. No do-aheads, no banking of hats, no retroactive entries. PC started on May 27, 2013 with Hat 1.
Got hats? If you loan 'em, you'll get e'm back safe and sound!
Posted by Adam Tschorn at 4:51 AM