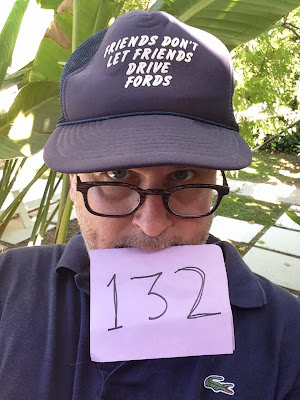 The penultimate hat in the birthday box from my sainted mother, if I were to hazard a guess it'd be that this came from my dad's "wall o' hats" near his desk at the Wayside Country Store.

For the record, it should be noted that I personally have no beef with the Ford make of automobile. In fact, this hat reminds me of a quote often attributed to the founder of the Ford Motor Company, Henry Ford, and one recently repeated by fellow Vermont Academy alumnus C.B. Vaughan on the occasion of being honored with the school's Florence Sabin Distinguished Alumni Award.

(In 1963, before going on to found the ubiquitous CB Sports outerwear brand of the '80s and '90s,  which he later lost control of to investors, he set a downhill speed skiing record of 106 mph.)

Inspirational words to be sure -- no matter what you're driving.


Q: OK, nice hat -- but what exactly is Project Cubbins, anyway?
A: One man's homage to Dr. Seuss and his second book, "The 500 Hats of Bartholemew Cubbins," which is celebrating the 75th anniversary of its publication in 2013, Project Cubbins is an attempt to document the wearing of a different hat or piece of headgear every day for 500 consecutive days. No do-aheads, no banking of hats, no retroactive entries. PC started on May 27, 2013 with Hat 1.