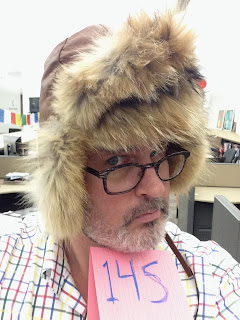 Yet another luxurious leather lid (say that five times fast) from the ISS (Ingrid Schmidt Series), according to the multiplicity of interior tags (four in all), we know the following things about this hat:

- the origin of the fur (fourrure provenance) is Canada
- the nylon in the quilted lining is made from reclaimed fibers (au fibres recupere)
- it is a size small (grandeur petite)
- it has been made in compliance with the Public Health Act of Manitoba (été fabriqué en conformité de la Loi de la Santé publique du Manitoba).

My only regret with this hat from the Great White North is that I didn't have it on hand (or head) on Monday to celebrate Canadian Thanksgiving.

Oh, and just in case you think you're seeing a case of duplicate hatting, I did recently sport a trapper up top -- just 10 hats ago -- but rest assured it was a whole different animal -- literally.

OK, nice hat -- but what exactly is Project Cubbins, anyway?
A: One man's homage to Dr. Seuss and his second book, "The 500 Hats of Bartholemew Cubbins," which is celebrating the 75th anniversary of its publication in 2013, Project Cubbins is an attempt to document the wearing of a different hat or piece of headgear every day for 500 consecutive days. No do-aheads, no banking of hats, no retroactive entries. PC started on May 27, 2013 with Hat 1. Got hats? If you loan 'em, you'll get e'm back safe and sound!
Posted by Adam Tschorn at 9:57 AM