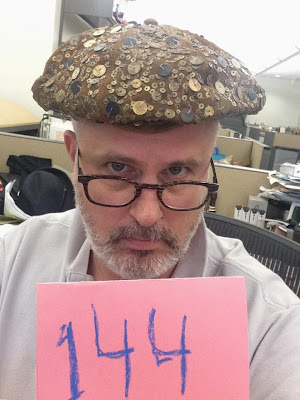 Dropped by the collection just this morning by Ingrid who seems to have redoubled her hat-herding efforts in order to earn membership in the MHDC. (When she blew in like the Santa Ana winds she actually dropped an entire hat-trick on my desk all at once -- look for the others in future installments).

In case you were wondering (because I was), the word paillette is a diminutive of the French word paille (meaning straw).

How did it come to mean, as the American Heritage Dictionary puts it: "a spangle used to ornament a dress or costume"? A clue might be comes from another definition of the word (from the same dictionary): "[a] small piece of metal or foil used in painting with enamel."  One piece of foil shaped like a piece of  straw lends its name to another piece of foil not shaped like a piece of straw and voila! -- word mission creep.

At least that's my theory - and I'm sticking with it.

OK, nice hat -- but what exactly is Project Cubbins, anyway?
A: One man's homage to Dr. Seuss and his second book, "The 500 Hats of Bartholemew Cubbins," which is celebrating the 75th anniversary of its publication in 2013, Project Cubbins is an attempt to document the wearing of a different hat or piece of headgear every day for 500 consecutive days. No do-aheads, no banking of hats, no retroactive entries. PC started on May 27, 2013 with Hat 1. Got hats? If you loan 'em, you'll get e'm back safe and sound!
Posted by Adam Tschorn at 1:14 PM