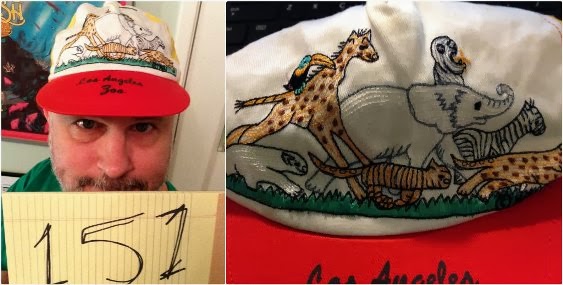 Day 151 / Hat 151; Red, yellow and white, 100% cotton, made-in-China cap with "Los Angeles Zoo" printed on the bill in black and extraordinarily detailed multicolor embroidery on front panel depicting what appear to be (from left) a giraffe with a toucan riding shotgun, a sloth, an elephant, a tiger, a banana-eating simian of indeterminate origin, a zebra and a leopard.

Another installment in the JH series, Jenn says this lid dates back as far as the Dork lid and was procured on a trip (maybe her first trip) to the Los Angeles Zoo.

I'm embarrassed to admit, in all my years here I have not actually been to the Los Angeles Zoo & Botanical Gardens which opened in November of 1966 and was the fourth zoo to serve the city (the first opened in 1885). Among the factoids you can find at the zoo's website? It was home to the world's first gorilla Caesarean section delivery in 1977.The gorilla baby,  weighing in at 5 pounds, 2 ounces,was named Caesar. (If you go to the website, click on "Zoo History" and scroll into the 1970s you can see an OMG cute photo of little Caesar. If it doesn't make your heart melt it's probably a lump of coal.)

A: One man's homage to Dr. Seuss and his second book, "The 500 Hats of Bartholemew Cubbins," which is celebrating the 75th anniversary of its publication in 2013, Project Cubbins is an attempt to document the wearing of a different hat or piece of headgear every day for 500 consecutive days. No do-aheads, no banking of hats, no retroactive entries. PC started on May 27, 2013 with Hat 1.
Got hats? If you loan 'em, you'll get e'm back safe and sound!
Posted by Adam Tschorn at 6:47 AM