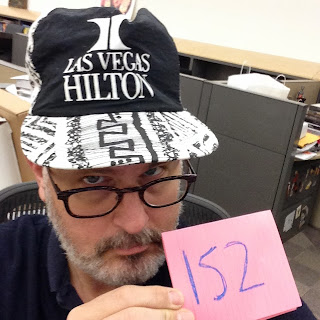 Another hat from the JH series, this cap is so bangin' it could only have come from an early '90s trip to Las Vegas (we'll need Jenn to confirm that time frame for us though).

[Post-publication addendum: Jenn, having just arrived in the office confirms that time frame. "My parents used take us to Vegas a couple times a year," she says, "And that was our hotel.")]

We've actually stayed at the Las Vegas Hilton a few times (back when it was still a Hilton -- in 2012 the affiliation with Hilton hotel chain was dropped and it became simply the "Las Vegas Hotel and Casino") including a particularly memorable Easter weekend.

Whatever the name, the place has some serious Sin City history to it. Here's a brief excerpt culled from the hotel's Wikipedia entry:

" ... designed by architect Martin Stern, Jr., [it'] was built in 1969 by Kirk Kerkorian and opened as the International Hotel. When it opened, the International was the largest hotel in the world. Barbra Streisand was the opening-night performer, along with Peggy Lee performing afterwards in the hotel's lounge.

On July 31, 1969, immediately following Streisand's engagement, Elvis Presley performed for 58 consecutive sold out shows, breaking all Vegas attendance records, (130,157 paying, and ostensibly gambling customers in the period of one month), with stellar reviews coming from both critics and the public. He broke his own attendance record in February 1970, and again in August 1970, and August 1972. When playing Las Vegas, he lived in the penthouse suite (room 3000), located on the 30th floor, until his last performance there in December 1976."

If you've ever stayed there you'd be aware of the Elvis connection as there's a can't-miss-it statue of the King outside the entrance to the hotel.

So it is incumbent upon us to once again tip our hat to Jenn and say (in our best Elvis voice): "Thank you - thank you very much."

A: One man's homage to Dr. Seuss and his second book, "The 500 Hats of Bartholemew Cubbins," which is celebrating the 75th anniversary of its publication in 2013, Project Cubbins is an attempt to document the wearing of a different hat or piece of headgear every day for 500 consecutive days. No do-aheads, no banking of hats, no retroactive entries. PC started on May 27, 2013 with Hat 1.
Got hats? If you loan 'em, you'll get e'm back safe and sound!
Posted by Adam Tschorn at 8:11 AM