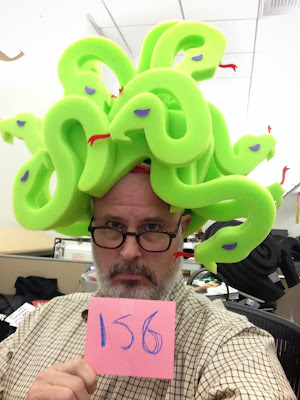 It seems the hat gods aren't just smiling on me lately -- they're laughing heartily! As I cruised into work on two wheels this morning, I was met with an ebullient Ingrid Schmidt who laid this fine piece of foam headgear on me (as well as two other pieces from the same collection you'll see sometime in the next few days).

Today's tip of the reptiles, scales and all, obviously goes to Ingrid "Hat Trick of One" Schmidt.

Oh, I hope you didn't look directly into my eyes -- if you did you'll be turning into stone any minute now.

A: One man's homage to Dr. Seuss and his second book, "The 500 Hats of Bartholemew Cubbins," which is celebrating the 75th anniversary of its publication in 2013, Project Cubbins is an attempt to document the wearing of a different hat or piece of headgear every day for 500 consecutive days. No do-aheads, no banking of hats, no retroactive entries. PC started on May 27, 2013 with Hat 1. Got hats? If you loan 'em, you'll get e'm back safe and sound!
Posted by Adam Tschorn at 11:25 AM