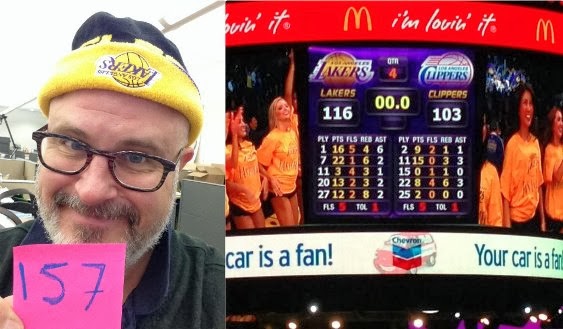 Day 157 / Hat 157:  Reversible knit Los Angeles Lakers cap by Adidas. One side (the interior in the above photo) is Lakers' gold with a team logo embroidery, reverse side (the exterior above) is part purple (aka "Forum blue") and part black with intarsia knit design in yellow that reads: "LOS ANGELES" followed by the Adidas logo.

I'm wearing this hat today in celebration of last night's tip-off of the 2013-2014 NBA season, for which I was fortunate enough to have seen from a seat inside Staples Center. (Every season, four of us scramble for two sets of tickets -- one early in the season and one late in the season -- the minute they go on sale. We just so happened, this time around, score opening day.)

The Lakers, playing as the home team, faced off against the team that shares the building -- the Los Angeles Clippers -- and were not expected to fare very well at all. The Lakers, as you can see from the scoreboard (above right) handily won against a team that swept them last season.

So I feel t's incumbent upon me to direct today's tip o' the knit cap to the Los Angeles Lakers.

A: One man's homage to Dr. Seuss and his second book, "The 500 Hats of Bartholemew Cubbins," which is celebrating the 75th anniversary of its publication in 2013, Project Cubbins is an attempt to document the wearing of a different hat or piece of headgear every day for 500 consecutive days. No do-aheads, no banking of hats, no retroactive entries. PC started on May 27, 2013 with Hat 1.
Got hats? If you loan 'em, you'll get e'm back safe and sound!
Posted by Adam Tschorn at 9:34 AM