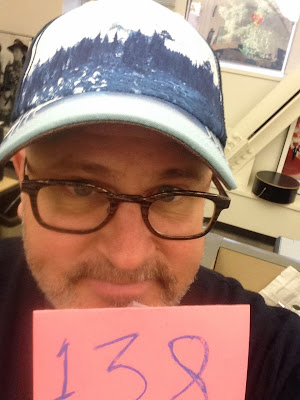 Day 138 / Hat 138:  Blue, baseball-style cap with mountain vista sublimation print on front panel and bill, navy blue back panels and leather details under bill and on adjustable strap in back. Embroidery on the back of the hat reads: "The Great Escape."

This hat, dubbed "Blue Mountains" is from L.A.-based  brand Brokn Legend's "The Great Escape" collection (others in the collection include "Green Forest" and "Red Rocks"). My compatriot Ingrid Schmidt recently brought the label to my attention, and I'm glad she did. I mean, what's not to like about a company with a philosophy like this: "At Brokn Legend we believe that a hat is more to a man than a simple accessory. It is a companion on his journey."

What the hat does remind me of  is the Great Escape theme park near Lake George, New York, where we used to go back when it was still a Mother Goose themed amusement park called Storytown U.S.A. (Which happened to be next door to a now-defunct old-timey them park called Gaslight Village with catchy ear-worming radio ads that ran something like this: "Gaslight Village - yesterday's fun today! Vo-dee-oh-doh, vo-dee-oh-doh, vo-dee-oh-doh-doh-doh!)

So today's double tip o' that hat goes to first to the hat-loving Brokn Legend bunch and second to Ingrid Schmidt for her mad hat-wrangling skillz.