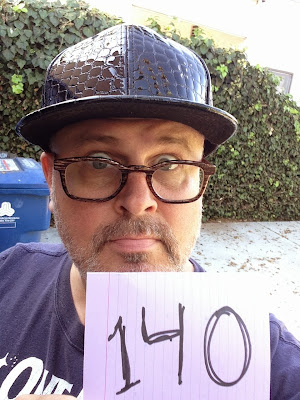 If I'm not mistaken, this particular design was part of a six-piece Spring/Summer 2013 collection that also included faux ostrich and faux snake versions.

For those of you who may not move in the fashion world, Scott is an L.A.-based designer whose shows are, for me, consistently among the highlights of New York Fashion Week. He's also been a kind of Energizer Bunny of collaborations over the years, both with brands like Adidas, Longchamps, Swatch and Smart Car and other creative types (most recently rapper A$AP Rocky for Adidas Originals and artist Kenny Scharf for his own Spring/Summer 2014 line).

This particular was loaned to me for the Project by my ink-stained, pixel-flinging compatriot Ingrid Schmidt (whom you might also remember from recently stepping to the plate and serving up Hat 138).


OK, nice hat -- but what exactly is Project Cubbins, anyway?
A: One man's homage to Dr. Seuss and his second book, "The 500 Hats of Bartholemew Cubbins," which is celebrating the 75th anniversary of its publication in 2013, Project Cubbins is an attempt to document the wearing of a different hat or piece of headgear every day for 500 consecutive days. No do-aheads, no banking of hats, no retroactive entries. PC started on May 27, 2013 with Hat 1. Got hats? If you loan 'em, you'll get e'm back safe and sound!
Posted by Adam Tschorn at 6:15 PM