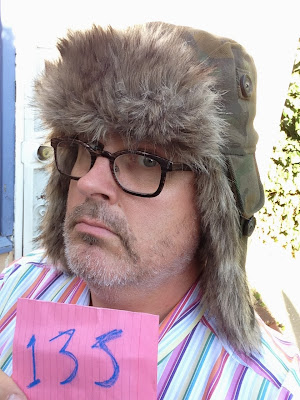 Probably more of a deep winter hat than an early fall lid, I'd decided a few days ago to bust out this cap for day 135 since it's been hanging on the coat rack in the cube farm for close to a year now, hovering just within my line of sight.

It's been one of the safety hats I've counted on being able to grab at a moment's notice ever since embarking on this multi-hat project. It's today's hat because reaching number 135 means I just have 365 hats (and days) left to go to fulfill my goal. So why not throw a little safety to the wind in the form of standby hat?

But with one year to go, I DO have a hat bucket list (as opposed to a bucket hat list) I want to work on. It includes: one of those antique diving helmets, an old-school bowler, an aviator's cap (with goggles), the helmet from a suit of armor, and a Greek fisherman's cap.

There's also a really random one -- a jellyfish hat -- that was shown to me in a bar in Saxtons River, Vermont, one particularly memorable night a week or so ago. I don't remember much about it or the creator (I was shown a photo of said hat on a phone) but as I said at the time, and reiterate now, I'll gladly pay postage both ways on that one if the hat gods make it manifest.

So today's tip o' the hat goes to the as-of-yet unrealized heroes of Project Cubbins -- I know you're out there.


OK, nice hat -- but what exactly is Project Cubbins, anyway?
A: One man's homage to Dr. Seuss and his second book, "The 500 Hats of Bartholemew Cubbins," which is celebrating the 75th anniversary of its publication in 2013, Project Cubbins is an attempt to document the wearing of a different hat or piece of headgear every day for 500 consecutive days. No do-aheads, no banking of hats, no retroactive entries. PC started on May 27, 2013 with Hat 1. Got hats? If you loan 'em, you'll get e'm back safe and sound!
Posted by Adam Tschorn at 4:42 PM