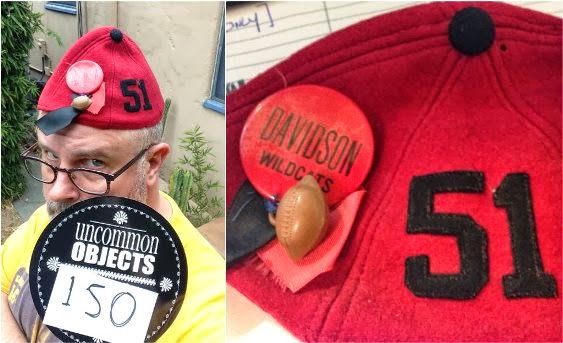 I felt it necessary to briefly interrupt the JH series to showcase this sweet lid that arrived yesterday from my sister-in-law Kathleen who procured it whilst on her recent jaunt to Austin, Texas. Based on the other items in the package that arrived, I'm guessing she found it at the antique store called Uncommon Objects.

'Thleen's note said she thought it might be too small for said head but if you ask me it fits just right. (She's long had a theory that I love hats and headgear so much because the headgear reminds me of when I actually had hair. Until I put this snug head rug atop my pate yesterday I didn't place much stock in that theory. But now I think she may have a point.)

So, who, exactly are said Davidson Wildcats? I thought you'd never ask. According to a brief search of the interwebs, Davidson College is private liberal arts college located in Davidson, North Carolina. The school's colors are indeed red and black and its mascot is one Will E. Wildcat.

Since the school was founded in 1837 by Presbyterians of North Carolina, it was certainly around in '51 (I'm just guessing that the number indicates a graduation year or a freshman class year and isn't akin to a jersey number.) In case you're interested, the next football game is apparently this Saturday (Oct. 26) against Jacksonville.

So a sincere tip o' the hat to 'Thleen and GO YOU WILDCATS!


OK, nice hat -- but what exactly is Project Cubbins, anyway?
A: One man's homage to Dr. Seuss and his second book, "The 500 Hats of Bartholemew Cubbins," which is celebrating the 75th anniversary of its publication in 2013, Project Cubbins is an attempt to document the wearing of a different hat or piece of headgear every day for 500 consecutive days. No do-aheads, no banking of hats, no retroactive entries. PC started on May 27, 2013 with Hat 1. Got hats? If you loan 'em, you'll get e'm back safe and sound!