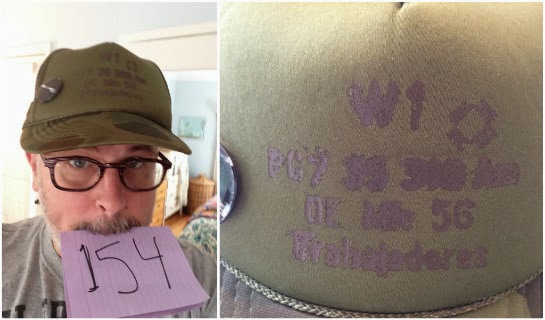 This is the last hat in the two hat-trick JH series and to tell you the truth it perplexes me. Google Translate tells me the word "trabajadores" translates from Spanish to mean "workers" or "work people." It is also the name of a Cuban newspaper founded in in 1970. I'm guessing this is one of those hats that's made to look like something a Cuban guerrilla might wear -- but that would be a long way to go for a little as I like to say.

A sincere multiple hat tip to Jenn Harris for this six-hat series -- and for ending it on a mysterious note. If she sheds any light on the provenance of the hat, I'll be sure to let you know.


OK, nice hat -- but what exactly is Project Cubbins, anyway?
A: One man's homage to Dr. Seuss and his second book, "The 500 Hats of Bartholemew Cubbins," which is celebrating the 75th anniversary of its publication in 2013, Project Cubbins is an attempt to document the wearing of a different hat or piece of headgear every day for 500 consecutive days. No do-aheads, no banking of hats, no retroactive entries. PC started on May 27, 2013 with Hat 1. Got hats? If you loan 'em, you'll get e'm back safe and sound!
Posted by Adam Tschorn at 2:57 PM