Project Cubbins: Hat 148 - Don't Be Afraid of the Dork 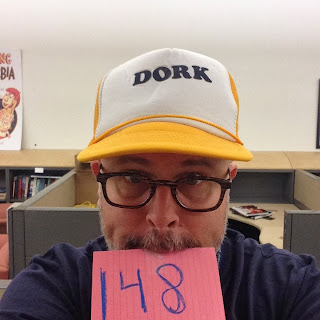 Day 148 / Hat 148: Trucker-style cap with gold mesh back and bill and white front panel with flocked black letters spelling out the word "DORK."

Of the dork lid, Jenn says: "That's one of the hats my sister and I have had for a long time -- since the whole Ashton Kutcher trucker hat thing was big. I remember wearing that with my hair in pigtails and wearing a Juicy [Couture] velour sweatsuit. That's so embarrassing."

Actually, I'd say it's downright adorkable.

So today's hat tip obviously goes to Jenn -- with many more to follow. ...

A: One man's homage to Dr. Seuss and his second book, "The 500 Hats of Bartholemew Cubbins," which is celebrating the 75th anniversary of its publication in 2013, Project Cubbins is an attempt to document the wearing of a different hat or piece of headgear every day for 500 consecutive days. No do-aheads, no banking of hats, no retroactive entries. PC started on May 27, 2013 with Hat 1.
Got hats? If you loan 'em, you'll get e'm back safe and sound!
Posted by Adam Tschorn at 8:52 AM