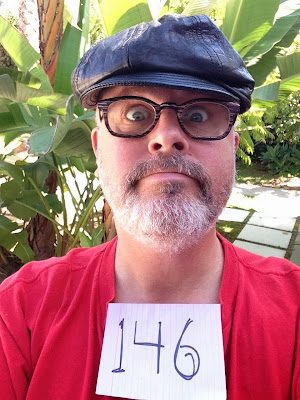 For some reason this hat (as well as this paillette-festooned Antik Batik cap I wore a few days back) reminds me of the hat worn by Kaptain Kool (Michael Lembeck) of Kaptain Kool and the Kongs -- the faux glam rock band created for Sid and Marty Krofft's Krofft Supershow Saturday morning variety show that ran on ABC from September 1976 to September 1978.

For some reason that short-lived fake band -- and Lembeck's headgear -- stuck with me. (It also caused no undue amount of confusion since, for several years, I mistakenly thought this band and Kool and the Gang were one and the same.) Of course the trippy brains of the brothers Krofft are also responsible for the hat-centric Saturday morning favorite of mine -- "Lidsville."

OK, nice hat -- but what exactly is Project Cubbins, anyway?
A: One man's homage to Dr. Seuss and his second book, "The 500 Hats of Bartholemew Cubbins," which is celebrating the 75th anniversary of its publication in 2013, Project Cubbins is an attempt to document the wearing of a different hat or piece of headgear every day for 500 consecutive days. No do-aheads, no banking of hats, no retroactive entries. PC started on May 27, 2013 with Hat 1. Got hats? If you loan 'em, you'll get e'm back safe and sound!
Posted by Adam Tschorn at 1:24 PM