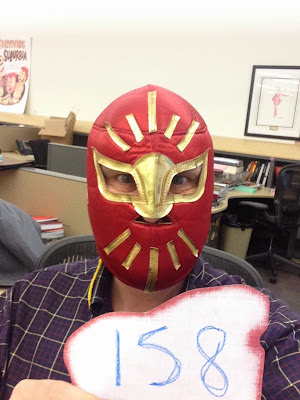 Day 158 / Hat 158: Red lucha libre mask with gold detail on front and sides and yellow lace-up closure in back.

For those of you who aren't familiar with it, lucha libre ("free wrestling" in Spanish) is a style of wrestling popular in Mexico and characterized by the colorful masks the wrestlers (called luchadores) wear in the ring.

I was only vaguely aware of the whole lucha libre thing until I moved to Los Angeles and a friend suggested checking out Lucha VaVoom -- which, wait for it, combines lucha libre wrestling, burlesque and comedy in evening's festivities.

I bought this bad boy at my very first Lucha VaVoom years ago, and I chose it as my Halloween headgear because it's obviously not something that gets a lot of daily use (though, truth be told, wearing it in L.A. traffic does have a certain calming effect on road-raging drivers).

Two other bits of Halloween-related  news:

1) I recently compiled a quiz about Halloween costumes in pop culture past and present (touching on Heidi Klum, Kim Kardashian and Steve Jobs among other topics).  How much do you know? Take the quiz and find out.

2) I get my indomitable Halloween spirit from my sainted mother Nancy who never fails to pull out all the stops (and embarrass half the family) with the elaborate costumes she wears to work at my family's Wayside Country Store in Arlington, Vermont (my favorite was the cow costume). If you are as curious as I am (or just want to see how far the apple falls from the tree) check out the big reveal at the store's Facebook page later today!

Related:
PC 157: Laker Tip-off Lid
Lucha VaVoom draws this man out of the house
Column One: The Fiesta of the People

OK, nice hat -- but what exactly is Project Cubbins, anyway?
A: One man's homage to Dr. Seuss and his second book, "The 500 Hats of Bartholemew Cubbins," which is celebrating the 75th anniversary of its publication in 2013, Project Cubbins is an attempt to document the wearing of a different hat or piece of headgear every day for 500 consecutive days. No do-aheads, no banking of hats, no retroactive entries. PC started on May 27, 2013 with Hat 1. Got hats? If you loan 'em, you'll get e'm back safe and sound!
Posted by Adam Tschorn at 10:44 AM