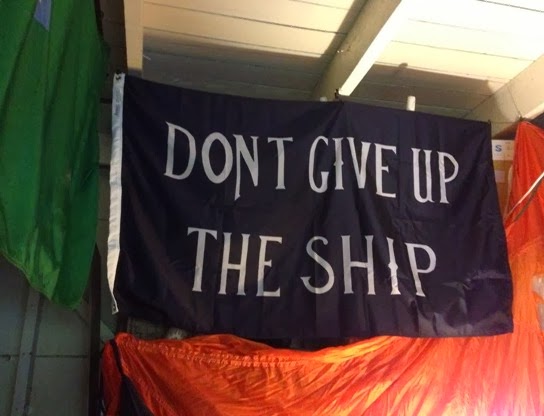 It's rare that I get a chance to post anything here that's not related to Project Cubbins, but since most of you won't be visiting the Garlodge any time soon, I felt it on;y right that my newest vexillological acquisition be unfurled to flap in the cyber breeze.

Hoisted into place a few days ago, it consists of white text on a blue background and reads: "DONT GIVE UP THE SHIP." The version I have was made by Annin Flagmakers.

Tradition has it that Captain James Lawrence said these heroic words after being mortally wounded in the engagement between his ship, the U.S. frigate Chesapeake, and HMS Shannon on 1 June 1813. As the wounded Lawrence was carried below, he ordered "Tell the men to fire faster! Don't give up the ship!"

Although Chesapeake was forced to surrender, Captain Lawrence's words lived on as a rallying cry during the war. Oliver Hazard Perry honored his dead friend Lawrence when he had the motto sewn onto the private battle flag flown during the Battle of Lake Erie, 10 September 1813."

It's worth noting that Perry was famously victorious in the Battle of Lake Erie. The original flag is still in existence and is apparently among the holdings of the U.S. Naval Academy Museum in Annapolis, Maryland.

A banner of buckle-down tenacity if ever there was one, I hoist these colors in specific honor of my family, the stubbornest tribe that SNAFU Hollow ever turned out.

Related:
Oliver Hazard Perry (from Biographies in Naval History)
"Don't Give Up the Ship" (from U.S. Naval Institute blog)
A Flag Bears Witness (from Pennsylvania Heritage Magazine)
Posted by Adam Tschorn at 9:04 AM