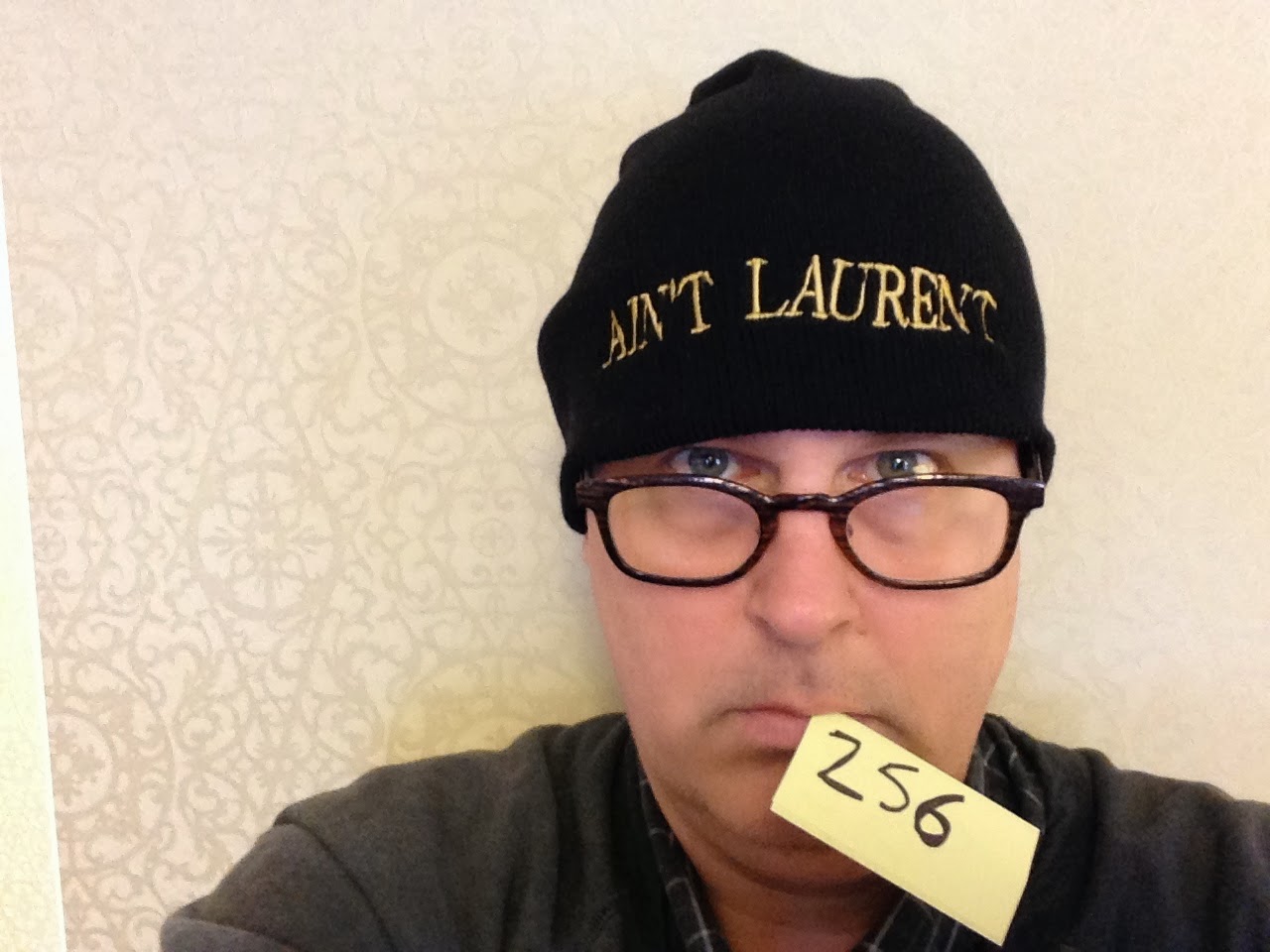 The embroidered slogan is, of course, a play on the esteemed French brand "Saint Laurent" (recently shortened from "Yves Saint Laurent." It's the kind of luxury brand parody popularized by Los Angeles-based designer Brian Lichtenberg, whose riffs on famous names, logos and typefaces includes Homiés (riffing on Hermès) and Féline (a nod to Céline) appear on T-shirts, sweatshirts and yes, black knit beanies with gold embroidery.

But this hat, found at a street vendor's table by the Bride during her Wednesday headgear binge (the final total was at least four - maybe five -- lids) is most assuredly not a a Brian Lichtenberg hat. First of all, Lichtenberg's wares may mock luxury labels but they aren't made on the cheap, his black knit beanies are made in the U.S.A. and will run you $48 at retail. This one, by comparison, cost the Bride all of $5.

Second of all, when I put it on it feels like I'm wearing pantyhose on my head. It lacks any fiber content tag (never a good sign)  but my best guess is it's spun from pure acrylic and would likely catch flame within two feet of a 60-watt light bulb.

No, this is no parody. This is, as the Bride so aptly put it, a knockoff of a parody.

Once I started poking around the interwebs to see if Lichtenberg had created items with the above slogan, I did find a site selling T-shirts, sweatshirts and $36 trucker hats emblazoned with a slightly longer version (Ain't Laurent without Yves") but I agree with the Bride's conclusion: "This ain't Ain't Laurent."

Related:
PC 255: Pompom Wonderful
PC 254: Auto Train Your HeadgearPC 253: Tam o' ShouldbeQ: OK, nice hat -- but what exactly is Project Cubbins, anyway?
A: One man's homage to Dr. Seuss and his second book, "The 500 Hats of Bartholemew Cubbins," which is celebrating the 75th anniversary of its publication in 2013, Project Cubbins is an attempt to document the wearing of a different hat or piece of headgear every day for 500 consecutive days. No do-aheads, no banking of hats, no retroactive entries. PC started on May 27, 2013 with Hat 1. Got hats? If you loan 'em, you'll get e'm back safe and sound!
Posted by Adam Tschorn at 6:37 PM