Project Cubbins: Hat 274 - My Cat On My Hat Edition 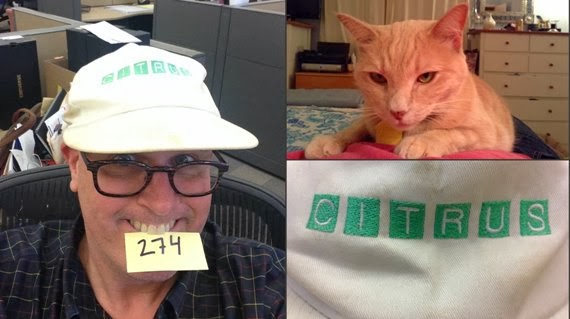 Day 274 / Hat 274: White, 100% cotton, baseball-style cap with turquoise-colored embroidery on front that reads: "Citrus." Interior tag reads: Nova, one size fits all, a tradition in headwear for over 60 years, made in China."

A loaner from the Russ Parsons BOH, it references Citrus, Michel Richard's long-shuttered L.A. restaurant, which, from 1986 to early 2001 occupied the Melrose Avenue space that's currently home to Hatfield's.

This isn't a totally random grab from the grab bag, though. I chose it as today's hat in honor of our cat -- also named Citrus -- who joined the family a year ago this week. (I remember it well -- being Pirate Season and all -- she didn't come out from under the bed for nearly a week).

That's her on the upper right above the closeup of the Citrus logo embroidery. That was the name she came with and we decided to keep it -- though in truth she sometimes moves through the house at such a high rate of speed we sometimes refer to her as "Butterscotch Lightning."

So a kitty hat-tip to the Lady Citrus and bolts of butterscotch lightning -- or butterscotch dust mops as the case may be - wherever we may find them perched and purring.

A: One man's homage to Dr. Seuss and his second book, "The 500 Hats of Bartholemew Cubbins," which is celebrating the 75th anniversary of its publication in 2013, Project Cubbins is an attempt to document the wearing of a different hat or piece of headgear every day for 500 consecutive days. No do-aheads, no banking of hats, no retroactive entries. PC started on May 27, 2013 with Hat 1.
Got hats? If you loan 'em, you'll get e'm back safe and sound!
Posted by Adam Tschorn at 2:58 PM