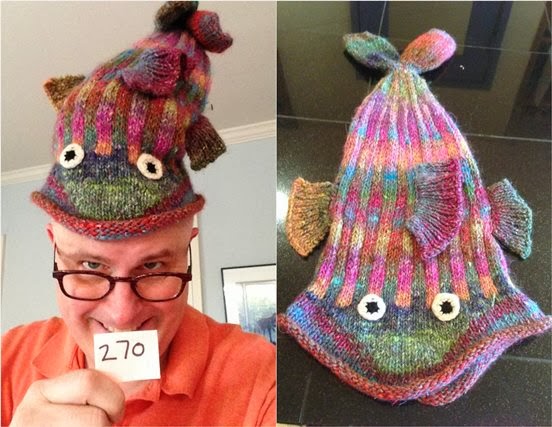 Graciously loaned to the Project by my favorite shepherdess Natalie Redding of Namaste Farms in Temecula. (This is the second hat she's contributed -- she also set PC 57) it's had me laughing heartily ever since it flopped out of its envelope and onto my desk.

"You keep getting hats from other people so NOT TO BE OUTDONE, I sent you a totally hand knit hat. A [Facebook] follower knit it and it's a big favorite of my family," Redding wrote.

Of this piscatorial pleasure's provenance Redding says: "The lady's name is Stephanie Buford Stratton of LunabudKnits. The yarn is Noro brand ....  I commissioned her to knit me a couple because they are so radical."

I wholeheartedly agree with Natalie's assessment and thought the hat was so awesome I wanted to make sure I included a photo of it that didn't have my fat head stuffed inside it.

In doing a quick search of the interwebs to find out where LunabudKnits hangs her knitting needles (Nicholasville, Kentucky, apparently) I ran across a fun blog post in which she discusses knitting this bad boy (or one very similar to it).

So a hat-tip (and tail flip) to Natalie -- whose new reality show "Shear Madness" is set to debut March 1 on Nat Geo Wild, btw -- with a much-appreciated (if unwitting) assist to Lady Lunabud for her fantastical fish and fiber creativity!

Related:
PC 269: Crossed PaddlesPC 268: Lubbock AvalanchePC 267: French Laundry ListQ: OK, nice hat -- but what exactly is Project Cubbins, anyway?
A: One man's homage to Dr. Seuss and his second book, "The 500 Hats of Bartholemew Cubbins," which is celebrating the 75th anniversary of its publication in 2013, Project Cubbins is an attempt to document the wearing of a different hat or piece of headgear every day for 500 consecutive days. No do-aheads, no banking of hats, no retroactive entries. PC started on May 27, 2013 with Hat 1. Got hats? If you loan 'em, you'll get e'm back safe and sound!
Posted by Adam Tschorn at 5:27 PM