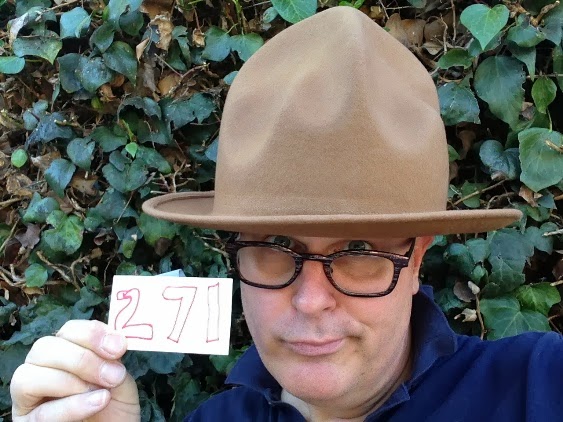 This, of course, is the same style of hat that Pharrell Williams wore on the 2014 Grammy Awards red carpet spawning a millinery meme that nearly hijacked the show (You can read my story about it here) and the minute I saw it I knew I had to have one included in the Project.

Post-Grammys, the shop posted to its blog a little bit of the background on the high-profile piece of headgear, which has apparently been on offer for the last 32 years. Here's an excerpt:

"First produced in 1982 for the ‘Nostalgia of Mud’ fashion show, the hat has been part of the regular look at the World’s End shop.

Made to look like a bashed in hillbilly’s hat it was worn by Malcolm in his Buffalo Girls music video & on the back of his Duck Rock album. ... The look of the ‘Nostalgia of Mud’ collection including the mountain hat had been inspired largely by imagery of Peruvian women whose indigenous outfit is to wear knee length circle skirts which swing when they dance, short jackets, blankets around them which they can use to carry things in & felt hats."

The best part? According to the post, there are more outsize lids in the pipeline -- a giant pilgrim hat is due out this summer and a towering top hat will be dropping in the fall. (I don't know who's more excited about this -- me or Pharrell.)

Oh, and if you want Pharrell's actual hat -- the selfsame one he wore to the Grammys (and not just a cousin to it like mine which can be ordered by calling the Melrose Ave. boutique),the Los Angeles Times reported today that the musician is auctioning it off on EBay to benefit his education-focused From One Hand to Another charity.  But have your giant change purse on hand -- as of this writing, the top bid is currently higher than the crown on this critter -- $10,500.

Today's hat-tip goes to the fine folks at Vivienne Westwood for crafting such an eye-catching hat -- with the assist to Pharrell Williams for bringing it to pop culture's center stage.

A: One man's homage to Dr. Seuss and his second book, "The 500 Hats of Bartholemew Cubbins," which is celebrating the 75th anniversary of its publication in 2013, Project Cubbins is an attempt to document the wearing of a different hat or piece of headgear every day for 500 consecutive days. No do-aheads, no banking of hats, no retroactive entries. PC started on May 27, 2013 with Hat 1.
Got hats? If you loan 'em, you'll get e'm back safe and sound!
Posted by Adam Tschorn at 3:30 PM