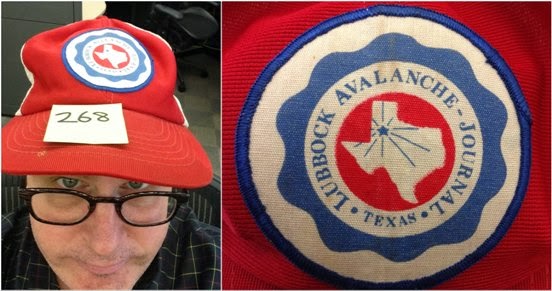 Day 268 / Hat 268: Trucker-style cap with red foam front and white mesh back with printed circular patch detail with blue embroidery around border. Patch includes white silhouette of the state of Texas  against a red background with a blue star. Words surrounding it read: "Lubbock Avalanche-Journal."

The sophomore piece of headgear from Los Angeles Times Food section editor Russ Parsons' BOH (that's "bag o' hats," don't forget),who tells me that the LAJ was the first newspaper he worked at after college -- from 1979 to 1981.

"I covered high school sports -- for towns like Muleshoe and Punkin Center," he told me, "and  I covered country music."

Reminds me of my days back at the Manchester (Vermont) Journal. While I never covered country music, we did have a running joke about a moose in the boiler room.

We were curious about the name of the paper -- as Lubbock didn't strike us as a particularly avalanche-prone part of the U.S. -- and according to the Wikipedia entry about the paper (which was founded in 1900 by by John James Dillard and Thad Tubbs), "the name "Avalanche" was chosen due to [Dillard's] desire that the newspaper surprise the citizens of Lubbock."

So a second hat-tip to Russ for the loaner lid - and a peek back toward the early days of  his 35-year career slinging ink and pixels.

Q: OK, nice hat -- but what exactly is Project Cubbins, anyway?
A: One man's homage to Dr. Seuss and his second book, "The 500 Hats of Bartholemew Cubbins," which is celebrating the 75th anniversary of its publication in 2013, Project Cubbins is an attempt to document the wearing of a different hat or piece of headgear every day for 500 consecutive days. No do-aheads, no banking of hats, no retroactive entries. PC started on May 27, 2013 with Hat 1. Got hats? If you loan 'em, you'll get e'm back safe and sound!
Posted by Adam Tschorn at 12:56 PM